Fire breaks out at factory in Mohali, no casualty : The Tribune India

Fire breaks out at factory in Mohali, no casualty

Workers left just before incident; cause of blaze unknown 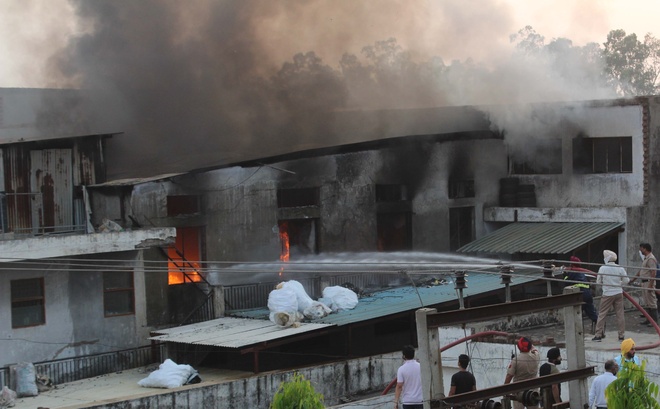 Firemen douse the flames at a plastic factory in the Industrial Area, Phase IX, Mohali, on Saturday. Tribune photo: Vicky

A massive fire broke out at a plastic factory in the Industrial Area, Phase IX, this evening. The incident could have turned into a major tragedy but for the timely removal of LPG cylinders lying at the unit.

No casualty was reported in the incident as all workers had left the factory, Accutex Sales and Services, situated at plot number 165, after finishing their work at 5 pm and the fire broke out at around 6 pm.

On receiving information, fire tenders were rushed to the site. The firemen managed to douse the flames in 30 minutes. Karam Chand Sood, Fire Officer, said they were able to save a factory official trapped in the fire. He said the exact cause of fire was yet to be ascertained. Preliminary investigation revealed that it occurred due to a short circuit, he added.

The fire officer said the fire spread very fast as there was inflammable material in the factory.

Sood said furniture and other items were completely damaged in the blaze.

Notably, a major fire had broken out at a chemical unit in the Industrial Area, Phase VII, on March 15 last year, gutting the factory.