Fire breaks out in Mohali industrial unit : The Tribune India

No casualty reported as workers had left premises after finishing work 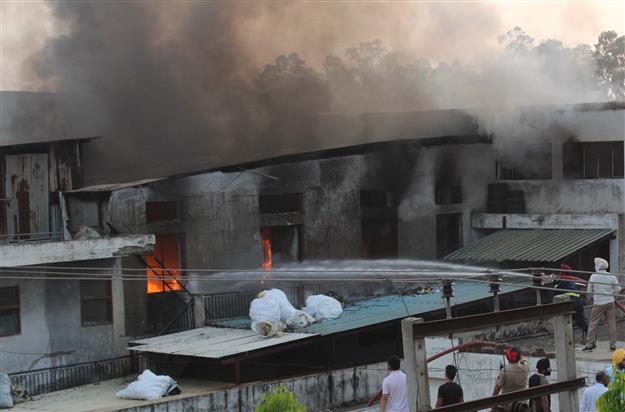 Firemen trying to control a blaze at a factory in Phase 9, Mohali, on Saturday. Tribune photo: Vicky

A major tragedy was averted due to the timely removal of LPG cylinders after a massive the fire broke out in a plastic factory ‘Accutex Sales and Services’ at plot number 165 industrial area in Phase 9, Mohali, on Saturday evening.

No casualty is reported as all the workers had left the factory after finishing their work at 5 pm. After receiving information the fire tenders immediately reached the site and doused the fire within 30 minutes.

Fire Officer Karam Chand Sood said no worker was present on the factory premises after the fire broke out around 6 pm. He said the exact cause of fire is yet to be ascertained but preliminary investigation reveal that it was due to the short circuiting. He said as there were inflammable items in the factory premises the fire spread very fast but as the fire tenders reached very soon they were able to douse the flames.

Sood said they were also able to take the help of the Bestech Mall and Swaraj Engines factory for filling the water in the fire tenders which helped them to douse the fire in 30 minutes. He said as of now it was not clear how was loss has occurred in the industrial unit and added that they were able to save the officer who was trapped in fire. He said furniture and other items were completely damaged.

Sood added that they were able to avert major tragedy as the LPG cylinders could have exploded that could have caused damage to an adjoining unit.

It is pertinent to mention here that a major fire had also broke out in an industrial unit in the Phase 7 Industrial Area in the city on March 15, 2019, gutting the chemical factory. Multiple explosions were heard during the fire at the thinner factory as highly inflammable chemicals that had been stored in barrels, exploded followed by ball of fire rising into the air.

One of the workers who came back to the factory premises after receiving information about the fire said all the workers had left the premises at 5 pm and around 6 pm black smoke started emitting from the factory.