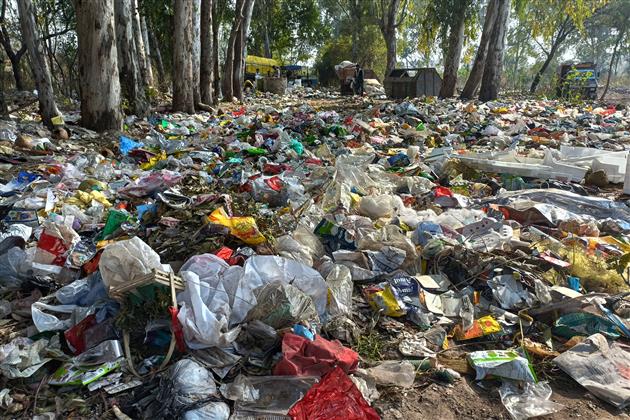 Garbage dumped in front of a housing society in Sector 50-D here has become a nuisance for residents.

Construction waste and garbage have been piled up over a vast stretch of land, which otherwise comprises trees and vegetation.

Locals say the area stretches to nearly three acres and the landfill raises a stink, which makes it unbearable for them to stay in their houses.

A visit to the site shows the open green area covered with debris and waste segregators packing up garbage in gunny sacks. Stray dogs and cattle can be seen sifting food from the trash thrown around.

A local resident said: “I have been living here for about 15 years now. This problem surfaced around five or six years ago. We can’t even stand in the balcony of our house. The stink emanating from the garbage makes it hard for us to breathe. The situation gets worse during rain.”

Nitin Vohra, who lives in a society right next to the dumping site, said: “The waste stinks. Sometimes, it is set on fire and the toxic fumes make it impossible for us to breathe clean air. This has been a major problem we all are grappling with for quite some time now. It doesn’t happen in any other sector of the city.”

The dumping site has also adversely affected the business of a Vita booth owner whose shop is just across the road opposite the site.

“I have been running this booth for the past 15 years now. The area stinks so much that people pinch their nose every time they come to my shop. No one wants to stand here. This area, which is spread across nearly three acres, has become a breeding ground for mosquitoes and flies. It has affected my business,” said Kesar Singh.

Will be cleaned by February 22, says Councillor

“Malba/debris will be removed on Wednesday. A police complaint will be filed and a board displaying prohibition of malba disposable will also be fixed,” said UT Chief Engineer CB Ojha.

MC, Admn point fingers at each other