Gardener done to death in Mohali : The Tribune India

Gardener done to death in Mohali 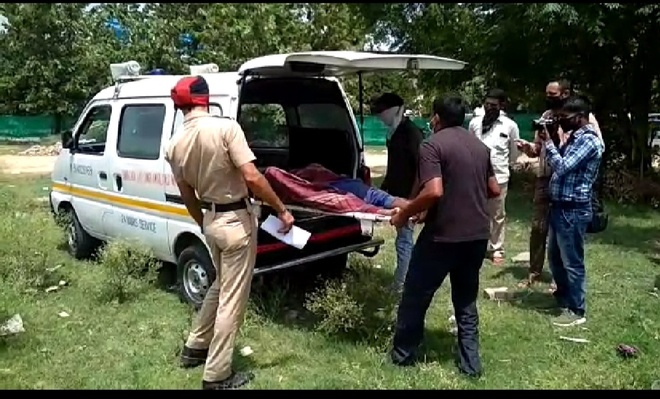 The body of the 30-year-old victim being shifted from the crime spot on the road separating Phase 7 and 8 in Mohali. Photo: Vicky

Painter’s murder: 2 days on, no clue

Two days after a painter was murdered at Badmajra, a 35-year-old man, also a migrant worker, was found murdered at Phase 8 here late last night. He was reportedly killed with the handle of a hand pump.

The incident came to light around 9 am today when morning walkers informed the police about a body lying behind a liquor vend in an open ground near YPS Chowk here.

Police teams, including DSP (City 2) Deep Kamal, Inspector Rajnish Choudhary, ASI Raspreet Singh and Constable Balvinder Singh, reached the spot and initiated an investigation into the matter. The victim was not wearing a shirt.

He has been identified as Raja Ram (30), who worked as a gardener-cum-labourer in Mohali. Raja Ram was living with his relatives in Amb Sahib Colony here, said the police.

The assailants are yet to be traced by the police. According to the police, the victim was murdered around 1.30 am. He was attacked multiple times with the handle of a hand pump on his face and head.

ASI Raspreet Singh said, “The face and head of the victim were disfigured as the assailants had attacked him repeatedly with the handle. The handle, having blood stains, has been recovered from the crime spot. The samples of blood and possible fingerprints have been collected by a forensic team.”

DSP Deep Kamal said, “We have started an investigation into the murder. A few persons have been rounded up on suspicion. We will interrogate them for more details.”

A case of murder was registered against unknown suspects at the Phase 8 police station today. The police said the victim’s body had been sent to the mortuary of the Civil Hospital in Phase 6 where his postmortem would be conducted tomorrow.