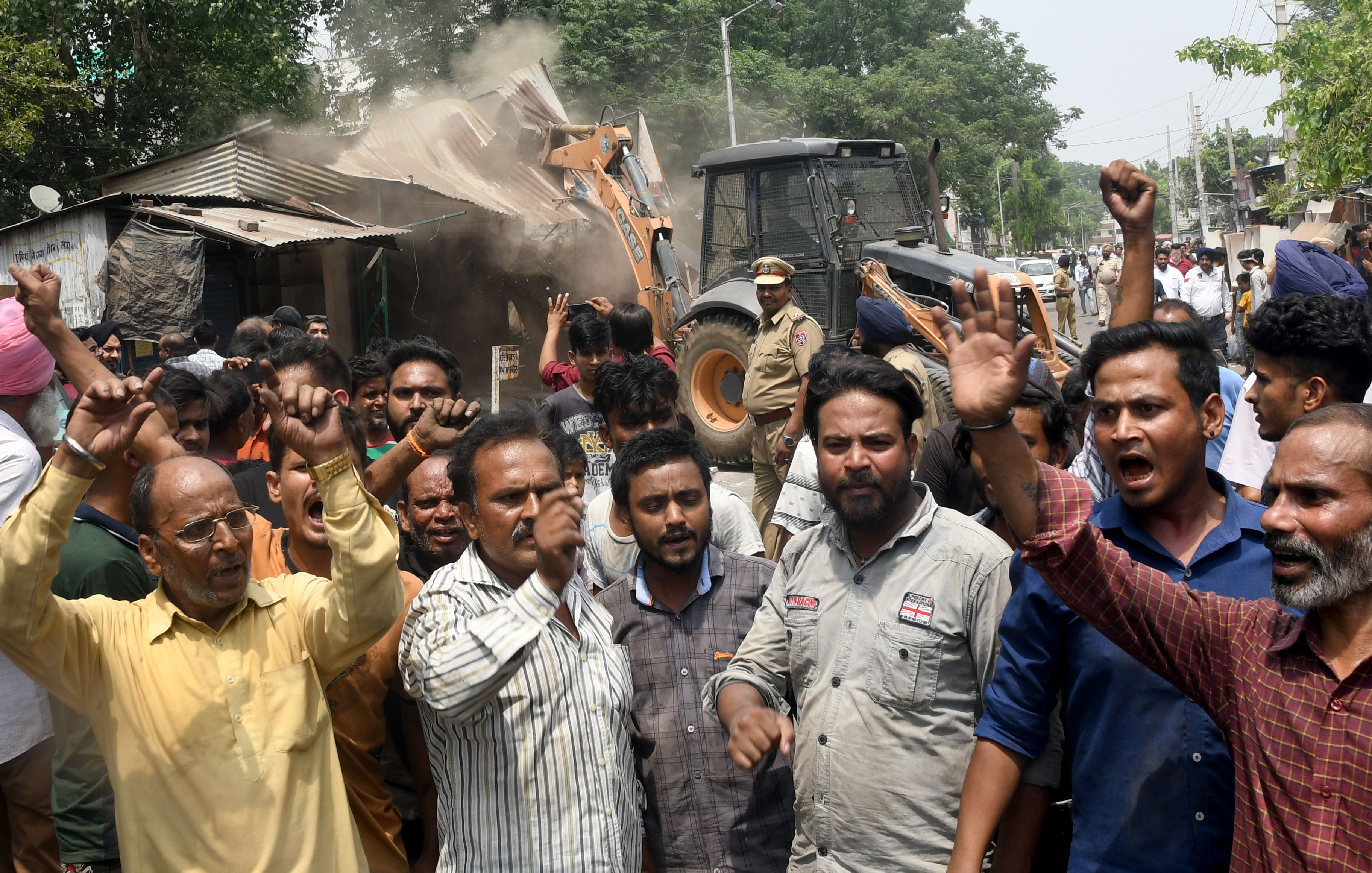 Shopkeepers protest against the demolition drive by GMADA at Phase 1, Mohali, on Monday. Tribune photos: Vicky

Eviction notices were issued in 2003

Estate Officer Mankanwal Singh Chahal said eviction notices were issued to the illegal shopkeepers in 2003 following which they had moved court. He said in 2020, the court dismissed their plea. However, in view of Covid, the court had, in its blanket orders, restrained eviction by any authority till March this year.

A team of GMADA officials, led by Estate Officer Mankanwal Singh Chahal, along with a heavy police force, reached the site with JCB machines around 11 am. However, the shopkeepers sought time from the officials to remove their belongings following which they were given an hour’s time.

The drive began around 12.30 pm and continued till 3.30 pm. With the demolition today, GMADA has been able to clear the four-acre land from encroachers, which was earmarked for a green belt. The site had been encroached upon to set up illegal shops in 1985.

Irked over the drive, shopkeepers held a protest and raised slogans against the state government and the local AAP MLA. Due to the presence of the police, GMADA officials, however, continued the drive without any obstruction.

Chahal said a three-day notice was given to the owners of the illegal shops to remove their belongings. He said the drive was carried out by 10 officers and 50 police personnel.

The Estate Officer said eviction notices were issued to the illegal shopkeepers in 2003 following which they had moved court. He said in 2020, the court dismissed their plea. But in view of Covid, the court had, in its blanket orders, restrained eviction by any authority till March this year.

Shopkeepers claimed that during his Assembly election campaign, AAP MLA Kulwant Singh had promised them that their shops would not be demolished. They said now, the state government was led by AAP, but still their shops had been razed. They said they had been given only three days, which were not sufficient for setting up shops at any other site. They said they had been earning bread and butter for their families and now, it would be difficult for them to make ends meet.

Sanjeev Vashisht, BJP state executive member, said the government should have made arrangements for providing separate space to these shopkeepers, who had been earning their livelihood here for the past around four decades.