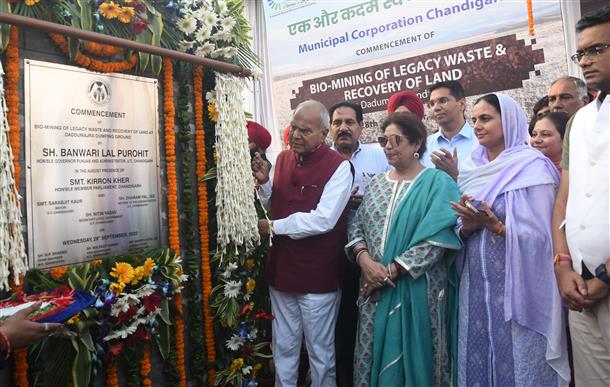 Biomining of 7.67 lakh metric tonne legacy waste dumped over eight acres of landfill site will be completed within 43 months by Akanksha Enterprises, a Karnal-based firm, at a cost of Rs 68 crore.

Addressing the gathering, the Governor said the project would give a relief to residents from foul smell and leachate oozing out of the dump, causing spread of disease.

Member of Parliament Kirron Kher said the Dadu Majra site, spread over 45 acres, had been used to dump garbage for the past 40 to 50 years. Under the Solid Waste Management Rules-2016, bioremediation of legacy waste and recovery of valuables was necessary.

Already, 4.21 LMT out of 5 LMT legacy waste lying for decades at a landfill site over 20 acres had been processed and in the coming months, 15 acres would be reclaimed and the work completed by March 31 next year.

The current bioremediation project had been started at another landfill site measuring 8 acres with 7.67 LMT legacy waste. It would be completed within the stipulated time frame.

Mayor Sarbjit Kaur said the existing MC Solid Waste Plant was being upgraded to process 200 MT of dry and wet waste, which would start functioning by next month.

The capacity to treat wet waste would also go up from 120 tonne per day to 200 tonne. “Whatever that cannot be processed further will be collected in a sanitary land filled site being constructed over 8 acres, along with the construction of a Leachate Treatment Plant, which will start functioning shortly,” she said.

In order to treat horticulture waste, the MC was constructing a Horticulture Waste Processing Plant with 20 tonne per day capacity in Sector 47. The wooden briquettes produced after the process would be used as fuel for cremation and extra ones would be sold to furnaces as fuel.

Similarly, 10 MT coconut shells were being shredded to produce coconut husk, which was being sold as refuse derived fuel (RDF).

UT Adviser Dharam Pal said as part of long-term solution to solid waste disposal, process had been initiated to set up a state-of-the-art dry and wet waste treatment and waste processing plant over the next two years.