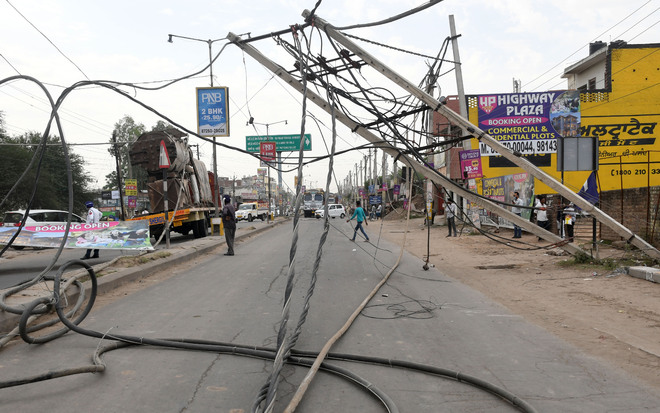 Four electricity poles broke due to the alleged negligence of the driver of a truck-trailer that was loaded with heavy machinery last night near Gilco Valley on the Kharar-Landran road.

After the incident, power was disrupted in the residential areas on one side of the Kharar-Landran road for more than 15 hours and massive traffic jam was witnessed. Traffic was then diverted.

Kharar PSPCL Executive Engineer Amandeep Singh said the rashly driven truck-trailer damaged six or seven electricity poles last night causing major losses to the PSPCL. He said they had to shut five feeders to carry out repair work to restore the power supply in the residential areas. He said the Mohali traffic police closed the vehicular traffic on the section for the day. Later in the evening, traffic was restored on one side of the road and power supply was restored to many parts of area.

Amandeep Singh said they got a case registered against the truck driver.

He said a major tragedy was averted as the truck driver could have been electrocuted if the high tension wires had fallen on the heavy vehicle.

Residents said power was yet to be restored in many localities. — TNS