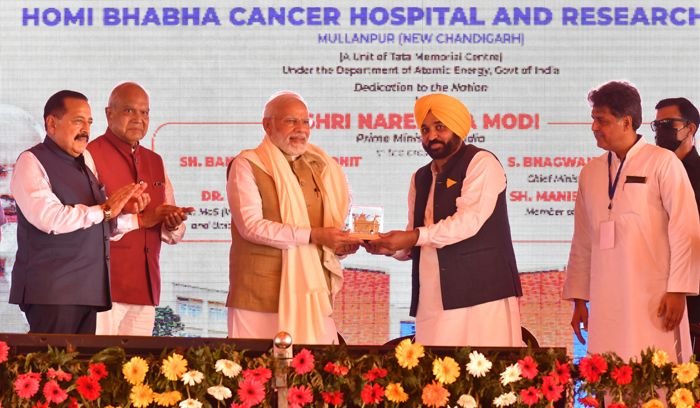 Prime Minister Narendra Modi today said to make India a developed nation, it was important to improve its health services.

Dedicating Homi Bhabha Cancer Hospital and Research Centre here to the nation, he said the hospital would provide services to the people of Punjab, Haryana and Himachal Pradesh.

He reiterated the commitment of the government to create facilities for cancer treatment. He said Tata Memorial Centre was now equipped to treat 1.5 lakh new patients every year. He said the new hospital and AIIMS at Bilaspur would reduce the burden on the PGI and provide relief to patients and their families. The PM said holistic healthcare had been among the top priorities in the country in the past eight years.

Before 2014, there were less than 400 medical colleges in the country. In the past eight years, over 200 new have been built. —Narendra Modi, Prime Minister

He said the health facilities in the country were being improved by working together on six aspects. The first was promotion of preventive healthcare, the second opening small and modern hospitals in villages, the third opening medical colleges and big research institutes in cities, the fourth increasing the number of doctors and paramedical staff across the country, the fifth providing cheap medicines and equipment to patients and the sixth to reduce difficulties faced by patients through use of technology.

Modi said quality testing facilities had been created and over 1.5 lakh health and wellness centres were being established. Of these, 1.25 lakh centres had already been established. In Punjab, nearly 3,000 centres were functioning. All over the country, over 22 crore people had been screened for cancer. As many as 60 lakh screenings took place in Punjab alone.

The PM said the Centre was working on a target of at least one medical college in every district of the country. The government had approved nearly 40 specialised cancer institutes across the country, of which many had already started providing services.

The PM emphasised the need for having adequate number of good doctors and paramedics.