Was on way to airport to leave for Udaipur, cancels trip 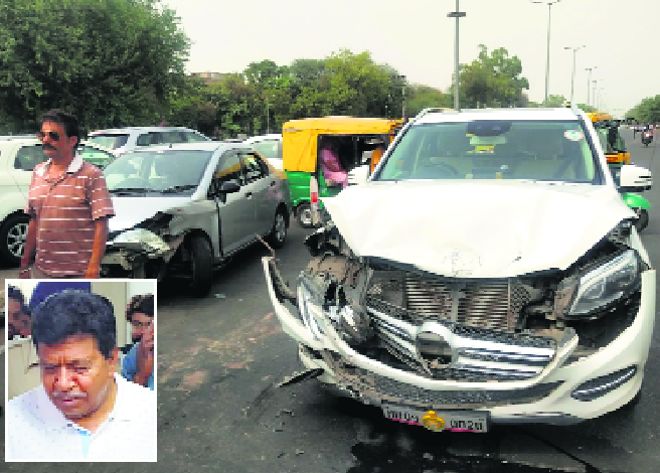 The car of Haryana Assembly Speaker Gian Chand Gupta (inset) that met with an accident in Sector 48 on the Mohali-Chandigarh border on Friday. Tribune photo

Haryana Assembly Speaker Gian Chand Gupta (73) was injured in a car accident near the Chandigarh-Mohali border in Sector 48 while on his way to the Mohali airport.

He was set to leave for Udaipur to attend a function, but had to change plans after the accident. Officials said he received minor injuries in the back and decided to cancel the tour.

Gupta returned home in another car. After the incident, the UT and the Mohali police rushed to the spot. The police said no written complaint had been received so far.

The front portion of the BJP leader’s car was severely damaged, while another car was also partially damaged. Sources said Gupta visited the Civil Hospital, Panchkula, where his MRI and other tests were conducted. Civil Surgeon Mukta Kumar said, “An MRI and other tests have been conducted. There is no orthopaedic injury. A few painkillers have been given.” Gupta, while leaving the hospital, told mediapersons that he was fine.

The police said the accident took place when a car-borne Sector 44 resident was crossing the road and first hit an escort vehicle and then crashed into Gupta’s official car from the front. Gupta, his gunman, one more passenger and the driver were injured in the accident. A DDR has been registered at the Sector 49 police station.