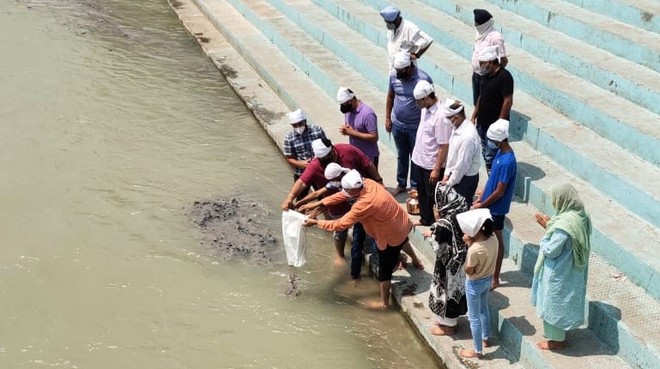 Milkha Singh’s ashes being immersed by his son Jeev in the Sutlej at Kiratpur Sahib on Sunday. TRIBUNE PHOTO

If life is a lesson, parents are the one who teach you to live it in a perfect way.

With the death of Milkha couple – Milkha Singh and his wife Nirmal Milkha Singh – world has lost two icons, but the 14-time winner on the international circuit, Jeev has lost his teachers.

He was a friend

My parents have always told me to work hard. My father was a friend, a very good friend, but when he needed to be a father, he was.-  Jeev Milkha Singh

Jeev immersed the ashes of his father Milkha Singh in the Sutlej river at Kiratpur Sahib on Sunday. He was accompanied by other members of the family. The ashes were immersed after performing religious ceremonies.

This is just a small note to thank you for the honour given to our parents, Nirmal Milkha Singh and Milkha Singh, through your columns and channels. Your words are like a silver lining in this period of grief. – Family

“The relationship between a child and parents never changes. It doesn’t matter how old you get or where in the world you end up living or how much you have accomplished in life. The relationship remains simple – it’s one of unconditional love,” Jeev wrote in his Instagram post.

“As parents, you have been the strength and backbone of our family since as far as I can remember. Together you have nurtured and supported each one of us with so much love and care, while somehow inspiring an entire nation to dream big and believe that anything is possible if you work hard and dedicate yourself...”

“...you have touched so many lives over the years and the impact you have made on this nation will long be remembered,” Jeev pointed out.

“Being around you has taught me how to be a better father, brother, husband and has made me (grow) into a more compassionate and empathetic human being. I love you with all of my heart mom and dad. It’s not going to be easy without you, but I know you’ll be up there, together, protecting us as you have been all our lives,” he added. Jeev though is not the only one who was inspired by his parents, there are several other tales which are hard to describe in a few lines.

For 19-year-old Harpreet, he lost his second parents. The hockey player, who caught the generosity of Milkha couple after the Tribune highlighted his plight while working as a labourer to help his family, is devastated by the loss. “I lost my second parents,” said Harpreet. “If I had any problem, they were just a call away.”

The couple had promised to take care of Harpreet, the best goal scorer in the 3rd Khelo India U-21 Games, and sponsored him under the Milkha Charitable Trust.