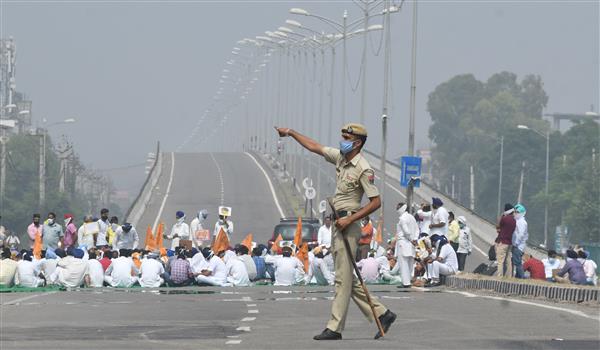 A policeman goes about his job as Shiromani Akali Dal activists and members of various farmer organisations block the Chandigarh-Ambala highway during the Bharat Bandh against the farm Bills, in Zirakpur on Friday. TRIBUNE PHOTO: RAVI KUMAR

Agitating farmers today blocked the Chandigarh-Ambala highway here using a harvester combine and tractors against the farm Bills, causing problems to commuters. However, the protest was peaceful as no untoward incident was reported from the district.

Over 200 farmers of the Bharatiya Kisan Union, led by Karam Singh Baroli, blocked the traffic on the Chandigarh-Ambala highway near Bhankarpur in Dera Bassi.

An AAP leader from Kharar, Narinder Singh Shergill, led the farmers’ protest at Kahnaur on the Kharar-Jurali road and blocked the highway.

Similarly, a large number of workers of the Youth of Punjab, under the leadership of Paramjit Singh Baidwan, along with farmers, blocked Airport Road in front of Singh Shaheedan Gurudwara in Mohali. They raised slogans against the Centre and burnt an effigy of Prime Minister Narendra Modi.

The bandh call given by the SAD in support of the protesting farmers evoked a mixed response as many shops remained open in various markets even though the Mohali Beopar Mandal had announced that only essential commodities shops would remain open and all other shops would observe a bandh till 4 pm. Several shops dealing in non-essential commodities were seen open in Mohali city.

A random survey of various markets, including Phase XI, 3B2, revealed that shops dealing in readymade garments and shoes, which fall under the category of non-essential commodities, remained open. However, in Phase VII, all shops were closed except those dealing in essential items. Vineet Verma, president of the Mohali Beopar Mandal, said they were approached by farmers’ unions for support and they had given their consent and decided to close all shops except those dealing in essentials till 4 pm.