In Humanities stream, Jasnoor Kaur of YPS tops by scoring 98.5 per cent 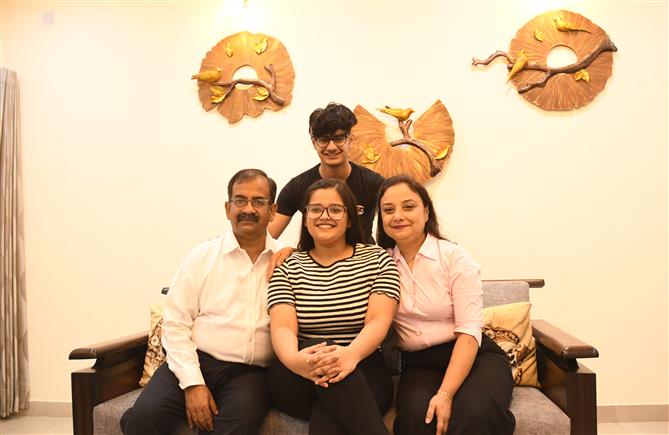 More than 1,000 students appeared in classes X and XII exams in Chandigarh.

Eighteen-year-old Muskaan Saxena has topped the tricity by scoring 99.25 per cent in Non-Medical Stream.

Muskaan, who is a resident of PGI campus, aspires to pursue Data Science and Economics from Delhi University. She has passed class XII from Strawberry Fields High School, Sector 26.

Muskaan shared that she is quite relieved after the declaration of results as covid-19 pandemic had dashed their hopes. “I was very anxious because of Covid-19 situation and worried over my score,” she said.

Sharing her exam preparation strategy, Saxena said, “I prioritised my academics and studied regularly. Make hand written notes of chapters that are difficult. This technique helps in understanding the subject when you write in your own words.”

She adds, “But, I would say that don’t just focus on studies but also engage in extra-curricular activities. I was actively involved in projects like menstrual hygiene and was into public speaking.”

Her parents Dr Akshay Kumar Saxena and Dr Babita Ghai are both doctors at PGIMER.

From Humanities stream, 18-year-old Jasnoor Kaur from Yadavindra Public School, Mohali, topped by scoring 98.5 per cent. She said she was a regular student to school and studied for six to seven hours.

Kaur, a resident of Phase 7, Mohali, wants to pursue BA honours in Psychology. She emphasised on the importance of being actively involved in sports and other activities. Her mother Gurdeep Kaur is an educator and father Sumanpreet Singh works at CII.

The tricity has two toppers for the Medical stream – Pavit Kaur Sidhu and Tanveer Singh Mangat, both from Yadavindra Public School, Mohali – each scoring at 97.5 per cent.

According to Sidhu, her clear focus on the studies without getting distracted from gadgets helped her sail through. Her father is a farmer and mother a homemaker.

As for Mangat, paying attention in class and clearing all doubts with teacher helped her score high in final exams. Her mother is an assistant professor at Punjabi University and father an IT executive.

With 96.25 per cent in Commerce stream, Sehajpreet Kaur (18), who is a farmer’s daughter, has topped the tricity from Yadavindra Public School, Mohali.

A resident of Ludhiana, she aspired to be a hospitality manager. While talking about her success strategy, she said, “Don’t take studies as a burden, rather divide it into small tasks and strive to perform each task with zest.”

Her favourite past-time was comedy shows on TV besides getting fresh air in park. She also loves to cook and dance during her free time. She said she would often bake cakes when she was bored from studies.

She has taken inspiration from her mother, who is a homemaker. “She toils all day at home and that’s what really inspires me.”