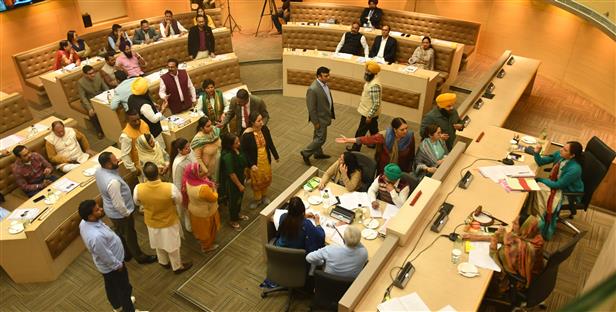 AAP and BJP councillors argue over the cables’ issue during the MC House meeting on Tuesday. Tribune photo: Pradeep Tewari

The issue of removing overhead cables and wires rocked a meeting of the Municipal Corporation (MC) House today as several councillors demanded that companies should be given more time for shifting these cables underground. MC Commissioner Anindita Mitra, however, told them that the firms should pay the permission fee before seeking more time.

The MC is facing revenue loss. We are now going to get Rs 6-8 crore. Had the drive not started, they still would not have applied for permission. — Anindita Mitra, MC Commissioner

No decision on the issue could be taken as the MC chief had to leave the meeting midway due to a personal reason.

BJP councillor Kanwarjit Singh Rana said studies of students were getting affected due to snapping of Internet wires by the civic body and something should be done about it. Congress councillor Gurpreet Singh Gabi said there was a need to give the firms some time to lay underground wires as public was suffering due to the MC action.

AAP councillor Yogesh Dhingra, Leader of Opposition, sought to know the power of councillors as, he said, the Finance and Contract Committee (F&CC) had passed a resolution to stop the drive against overhead cables for eight months, but the MC chief said she was not bound by the resolution.

The MC Commissioner said the F&CC had no power to give administrative orders. “The agenda was first passed in the MC House to remove such cables following which the enforcement had started. Since there were complaints, the firms were given three-month deadline to remove illegal cables and lay them underground as per the norms. However, none of them even applied for the permission during that period. It was only after we again started removing cables that they have started seeking permission for laying cables underground.”

“The MC is facing revenue loss. We are now going to get Rs 6-8 crore. Had the drive not started, they still would not have applied for permission. If they want time, they can get it, but only after payment of fee and official permissions,” said Mitra.

Her reply saw a thumping of benches, mostly by BJP and nominated councillors.

BJP councillor Harpreet Kaur Babla said the cables had been hanging in a haphazard manner and were dangerous. “Why should we forgo the revenue coming from companies,” she asked.

The problem of hanging cables and wires was highlighted in these columns in a series of reports. The MC had started removing overhead cables in different parts of the city on November 1. The action started after a three-month deadline got over. After the civic body started removing cables, many firms came forward to pay fee for permission to lay underground cables. MC officials said if they were again given a breather, they would not deposit fee or shift cables underground.

While councillors and MC Commissioner Anindita Mitra differed on giving more time to firms to shift the cables underground, no decision on the issue could be taken as Mitra had to leave the House meeting midway due to a personal reason.