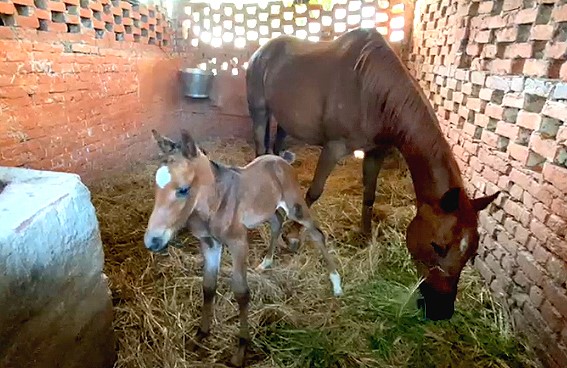 An eight-year old thoroughbred mare, named Red Rum has given birth to a healthy male, which has been christened as Rumson. Tribune photo

A pioneering project by the Indo-Tibetan Border Police Force (ITBP) to breed horses for meeting its operational, logistics and equestrian requirements is set to gallop with the first colt being born at its Basic Training Centre in Bhanu near Chandigarh this week.

An eight-year old thoroughbred mare, named Red Rum has given birth to a healthy male, which has been christened as Rumson.

“With this, ITBP has become the first Central Armed Police Force to have its own horse-breeding programme,” Inspector General Ishwar Singh Duhan, said.

“We will gradually be expanding the project to cater for the requirement of horses by other central forces as well as for state police forces,” he added.

The ITBP uses horses for patrolling along the Himalayan frontier as well as for ceremonial parades and equestrian events. It has over 600 equines, including ponies and mules that are employed for border logistics in high altitude and remote areas.

At present, ITBP is procuring equines from the Army and some other local stud farms. A thoroughbred, which is of Arabian and Central Asian lineage, costs about Rs 7-8 lakh each through government to government transaction.

“The project was approved by the Director General last year with the aim to reduce dependence on other agencies for horses, after which the requisite infrastructure and allied facilities were set up at Bhanu,” Dr Sudhakar Natarajan, Deputy Inspector General heading the force’s veterinary wing, said.

“The bloodline for breeding has been scientifically selected to get the best phenotype,” he added.

A team of ITBP vets, including Commandant KJ Singh and Deputy Commandants Raveshwar Rana, Rajender Joshi, Amit Chetri and PK Jena managed the birth of Rumson, and are also providing medicare to the other expecting mares. A project to breed dogs for police forces is also underway at Bhanu.

The ITBP is also looking at breeding warmblood horses, which are of European lineage and larger than thoroughbreds. A global tender is expected to be issued soon for procuring three mares and one stallion.