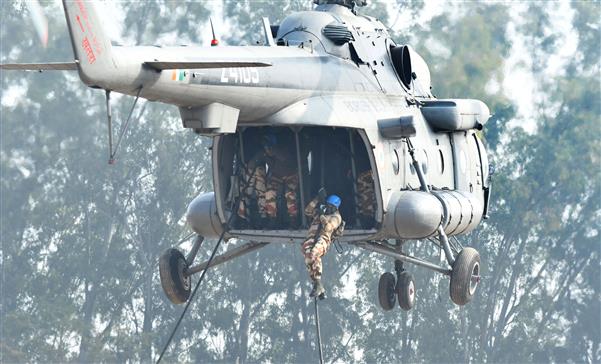 As part of their ongoing commando course, Indo-Tibetan Border Police (ITBP) personnel demonstrated slithering operations from helicopters, a tactic used for rapid induction and deployment of troops during operations.

A total of 105 personnel are undergoing training as part of the 97th Commando Course at the ITBP’s Basic Training Centre a Bhanu near Chandigarh. The duration of this course is 10 weeks. An Mi-17 helicopter from the Border Security Force’s Air Wing based in New Delhi was used for the slithering operations.

Rajesh Sharma, Deputy Inspector General, ITBP, said the commandos were imparted rigorous training and a variety of lessons, in which heli-slithering formed an important part. In this, the commandos were taught to descend from hovering helicopters with the help of a rope.

The main purpose of slithering is that troops can be deployed in difficult terrain and remote places where no helipads are available or where the ground is soft or uneven in the shortest time by means of a helicopter. It can also be used in urban areas during anti-terror operations.