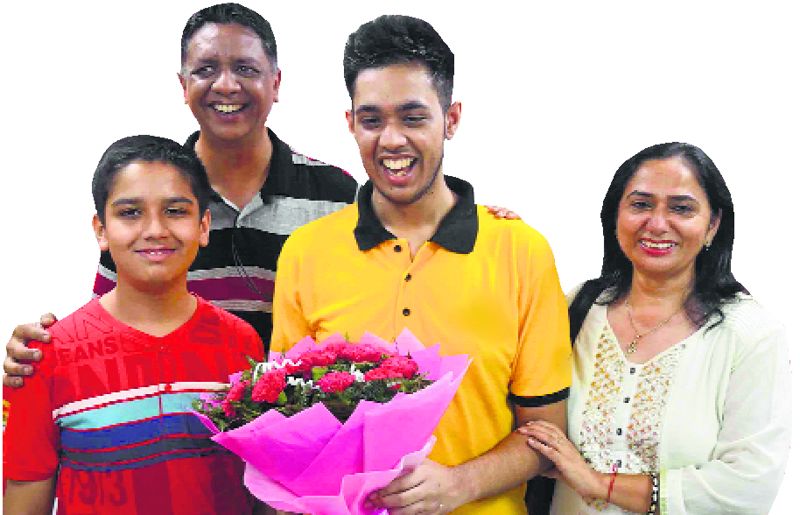 Chinmay Khokar has emerged as the tricity topper by securing all-India rank 42 in the JEE Advanced, results of which were announced on Sunday. Harsh Jakhar from Sector 35 came second, securing AIR 48, while Anirudh Garg from Sector 16 finished third with 50th rank.

Khokar has been dreaming of pursuing computer science engineering from IIT-Mumbai. Hailing from Meerut, Khokar did his schooling from Bhavan Vidyalaya, Chandigarh.

He took keen interest in PCM (physics, chemistry and mathematics). While in Class VIII, he decided to prepare for the JEE.

He won silver medal for India in the International Chemistry Olympiad-2022, held at Tianjin, China.

A resident of Sector 43, Khokar said: “I feel blessed to be among the JEE Advanced achievers. The platform provided by my teachers and my brother’s guidance have been key to achieving the goal. I have always stayed positive.”

“For me, motivation is something that changes along the way. First it was just the most straightforward way ahead, then a matter of pride and by the end the desire to end up in the same college as friends. Confidence is half the battle. Talking specifically about the JEE, unless you believe you can do it the normal way, you will either just leave the question or spend double the time trying to chase it,” he said.

Reacting to their son’s success, Chinmay’s parents said: “We were certain that his hard work would make him succeed one day. Regular study helped him sail through.”

Jakhar, who secured AIR 48, is a product of Bal Niketan Model Senior Secondary School, Sector 37. “Consistency in all subjects matters if you want to score good in JEE Advanced. Maths was a bit tricky for me, so I had to spend extra time on it.” Jakhar has secured a berth in IIT-Delhi in the computer science batch.

Anirudh Garg, who secured AIR 50, has also done his schooling from Bhavan Vidyalaya, Panchkula. A resident of Sector 16, Chandigarh, Garg said: “I owe it to my teachers for their motivation and parents for their support in achieving my dream. I believe right mindset, confidence and trust in teachers go a long way in shaping up your career.” Garg has secured a berth in IIT-Bombay in the computer science engineering stream.

His parents wanted him to pursue engineering and started providing him with necessary resources required to give him the edge.

Nivesh Aggarwal has finished fourth in the tricity by secured AIR 60. He has done his schooling from Sri Guru Harkrishan Public School, Chandigarh. A resident of Sector 32, Chandigarh, Aggarwal thanked his teachers for the right guidance and encouragement. Rejoicing over his success, his father said: “He has made us proud. His hard work has paid off and we feel extremely satisfied. As parents, it is gratifying to see your child fulfil dreams with the blessings of his grandparents and teachers.”

Twins Soumil Bansal and Somya Bansal from the city have secured AIR 69 and 92, respectively. Both have completed their schooling from Government Model School, Mani Majra.