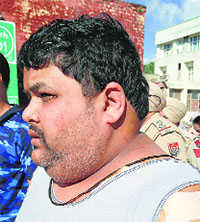 Kharar police have arrested national president of Shiv Sena (Hindu) Nishant Sharma and Arvind Gautam for making a provocative speech and threats against a particular community in Jalandhar by releasing a video.

Kharar City SHO Daljit Singh said, “Nishant Sharma, a resident of Kharar; and Arvind Gautam, a resident of Phase 6, Mohali; have been arrested. Raids are being conducted to arrest the other accused.”