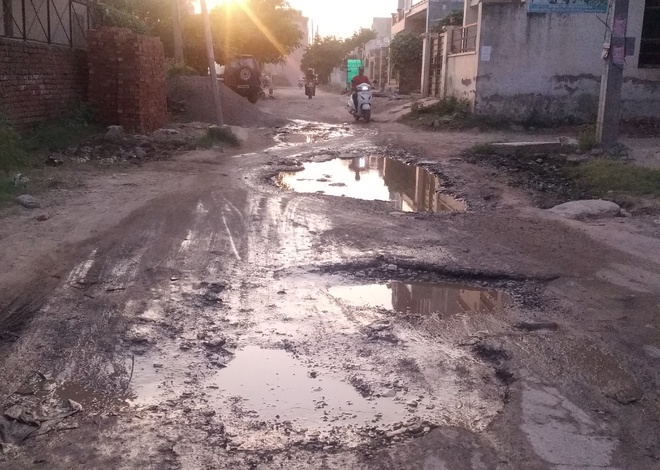 A road in a dilapidated condition from Sante Majra Colony to Chhaju Majra village in Kharar on Monday. Tribune photo: Vicky

Several road stretches in Kharar continue to be in a shambles. The roads are dotted with potholes and are in a dire need of recarpeting. The road from the Chajju Majra colony to Sante Majra village is in bad shape and crying for attention for a long time.

Due to huge potholes, road accidents are often reported from here. When it rains, motorists fail to spot the potholes, leading to mishaps.

The Kharar-Landran road near Fateh Burj is also in bad shape. The road is damaged and gives commuters a bumpy ride. Local residents have raised the issue with the authorities several times, but to no avail. Several inner roads, which lead to housing societies in Kharar, have not been recarpeted for a long time. In some areas such as Sunny Enclave, roads are damaged. Fed up with the authorities, residents in many areas have started filling potholes on their own. “The situation is bad. Almost all roads in Sunny Enclave are in a pathetic condition,” said Manjinder Singh, a resident of Sector 125.

“We are sick and tired of the bumpy rides. The authorities must recarpet roads as soon as possible,” said Vikas Sharma, a resident of Sector 124. Officials said the tender process was on for carrying out repairs on roads. — TNS