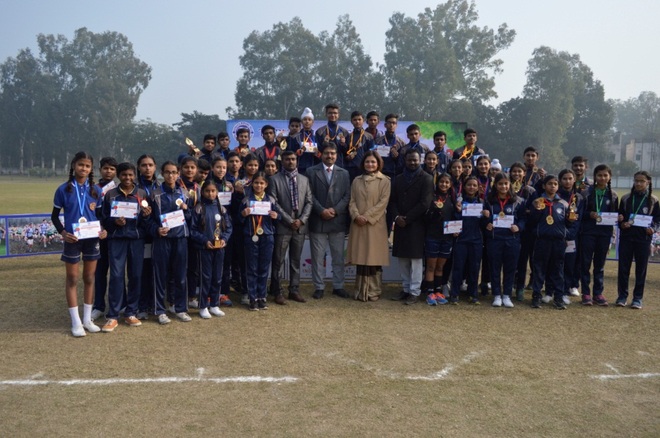 Students with their medals and certificates during the concluding ceremony of the Annual Athletics Meet of Tribune Model School at the Sector 7 Sports Complex on Saturday. Tribune photo

Kritika of Dronacharya House won the 400m gold in the girls’ U-14 competition on the concluding day of the 8th Annual Athletics Meet of Tribune Model School at the Sector 7 Sports Complex here today.

In the boys’ 800m contest, Samdarsh of Shankracharya House led the field in the boys’ U-14 category. He was followed by Nitesh of Chanakya House and Shahzaman of Dronacharya House in second and third places respectively.

In the girls’ 800 run, Jaspreet of Shankracharya House won the gold, while Pushpa of Dronacharya House claimed the silver. Riya of Chanakya House bagged the bronze medal.

In the boys’ U-17 1500m competition, Harsh Yadav and Ansh of Vishwamitra House bagged the gold and the bronze medals, respectively, while Harshveer of Dronacharya House clinched the silver.

In shot put, Ritesh of Shankracharya House topped the list in the boys’ U-14 category, while Janice of Dronacharya House led the girls’ U-14 division.

Kartikey, Ayush, Vaibhav and Manmeet of Chanakya House claimed the 4x100m relay gold in the boys’ U-17 category. Pushpa, Kritika, Janice and Divya of Dronacharya House topped the chart in the girls’ U-17 competition.

Samdarsh, Prisha, Ayushi and Amit of Shankracharya House bagged the gold medal in the U-14 4x400m mixed relay.

Harsh Yadav of Vishwamitra House and Jaspreet of Shankracharya House topped the podium in the U-17 boys’ and girls’ 100m dash respectively.