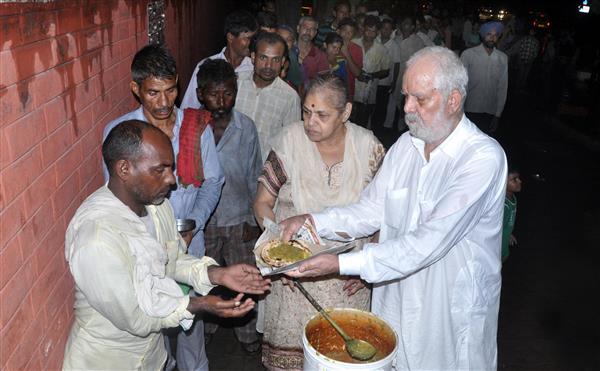 Padma Shri Jagdish Lal Ahuja (85), popularly known as ‘Langar Baba’, passed away in the city today. He was suffering from leukaemia for a long time and took his last breath on the intervening night of Sunday and Monday as his oxygen level dropped to 50.

For 20 years now, Ahuja’s langar outside the PGI had been serving nearly 2,500 people a day. He sold his entire property, including 45-acre agriculture land and a one kanal triple-storey house in Panchkula, to fund the langar. He never accepted any donation to run the langar.

The langar, which continues to this day, was started outside the PGI in January 2000 when Ahuja was hospitalised there for the treatment of cancer.

Ahuja would often say that no one knew better than him what it meant to go to bed on an empty stomach. His story goes back to Partition, when a 12-year-old Ahuja migrated from Peshawar and stayed at the Mansa railway station in Punjab for weeks. “I have seen such poverty when I was not sure of even getting two square meals a day. However, I never got down to begging. I would survive by selling grams,” he would recall.

From Mansa, he shifted to Patiala where he would sell candies and bananas on buses. Later, he moved to Kansal on the outskirts of Chandigarh in 1956 where he started selling bananas.

It was during his son’s birthday celebrations when the realisation dawned upon him that while his family enjoyed a feast, many faced poverty and starvation. Since then, he has been organising a langar every day.

On January 21, 2000, he organised a langar outside the PGI. The response was low on Day 1, but by the fifth day, people started coming.

As he was not keeping well for the past some time, only one thing would bother him: who would look after the langar once he was gone? His grandson, Kushagra Duggal, said, “We are grieving at the moment and are yet to take a call on who will carry forward his legacy.

For 20 years now, Padma Shri Jagdish Lal Ahuja’s langar outside the PGI had been serving nearly 2,500 people a day. He sold his entire property, including 45-acre agriculture land and a one kanal triple-storey house in Panchkula, to fund the langar.