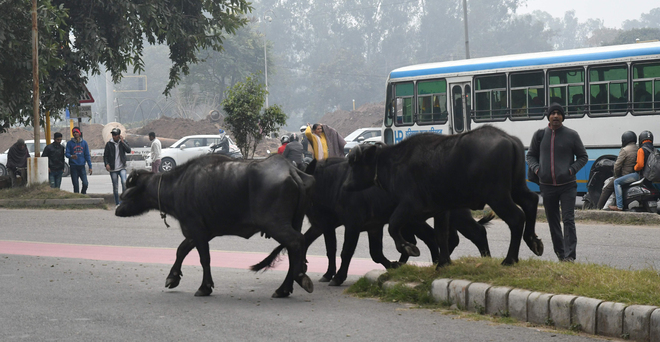 Stray cattle have been the cause of several mishaps in the city.

Wandering cows or buffaloes on city roads will bring a huge penalty on their owners now.

Punjab Governor and UT Administrator VP Singh Badnore has approved the proposal of the Chandigarh Municipal Corporation (MC) to enhance the fine imposed on owners who let their livestock loose.

Now, the owners will have to pay Rs 20,000 to the civic body to get their cattle back. The penalty has been increased over six times.

Last year, the General House of the MC had approved the agenda to enhance the fine manifold.

Now, there will be a flat Rs 20,000 fine for releasing a majority of animals. The MC proposed to increase the fine after finding it difficult to deal with the stray animal menace.

The charges have been increased under Section 12 of the Cattle Trespass Act. Earlier, the fines were different for different types of the animal. Now with the increased fine, the amount of penalty is same for all animals caught by the MC. Earlier, the fine imposed on the owner of stray buffalo was Rs 4,000. Similarly, it was Rs 3,000 in case of a stray cow. The fine for stray camel, horse, mare, pony, mule, donkey and pig was Rs 2,000, which too has been increased to Rs 20,000.

Stray animals have been cause of many accidents on the city roads. The victims’ families also filed cases in court against the Municipal Corporation, seeking compensation.

The increased fine is equivalent to that imposed in Mohali. The Mohali MC had increased the penalty from Rs 5,000 to Rs 20,000 last year.