Real-time monitoring of MC vehicles also on the cards 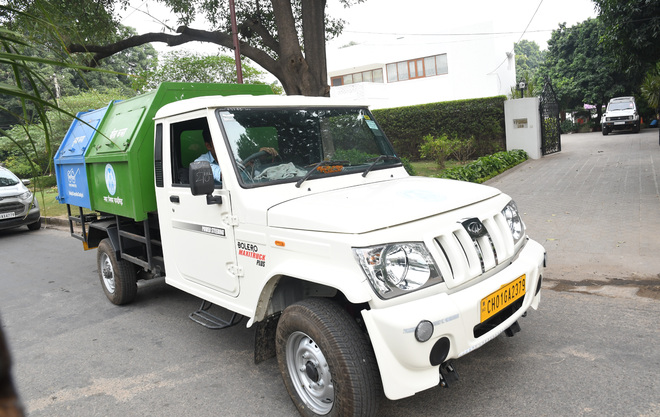 A tender will be floated next week for the purchase of 400 waste collection vehicles at a cost of ~30 crore. File photo

The door-to-door waste collection in the city will soon have fixed timings and the segregated garbage collection vehicles of the Municipal Corporation will be monitored live.

Chandigarh Smart City Limited is going to implement a supervisory control and data acquisition (SCADA) plan. It has floated a tender for the same and three firms have shown interest in it.

“Under the plan, there will be no delay in the lifting of waste. There will be a particular time of lifting. The vehicles will be monitored live. If a garbage collection vehicle stops at some place for no reason, it will be pointed out to the worker concerned through the online mechanism,” said NP Sharma, General Manager, Chandigarh Smart City Limited.

He said they would float a tender next week to buy 400 segregated waste collection vehicles for Rs30 crore. While Smart City Ltd will be contributing Rs20 crore, Rs10 crore would be drawn from Swachh Bharat Mission funds.

The MC has no funds left so it asked Smart City Limited to buy the vehicles, which are meant to replace the cycle carts being used to collect garbage in the city.

These vehicles will then take the collected garbage to the three waste recovery centres, which are being constructed to replace existing Sehaj Safai Kendras. Dry recyclable material will be sold at the centres while the remaining garbage will be taken to the waste processing plant in Sector 25. The residue of the processed waste will be dumped at the sanitary landfill in Dadu Majra.

The MC had purchased over 100 segregated waste collection vehicles last year. But since waste segregation did not start in the city, their utility was questioned. MC officials claimed that they were using the vehicles for awareness and collecting segregated garbage in UT villages.

It may be mentioned that the waste collectors have not agreed to use the MC’s waste collection vehicles and insist on collecting segregated waste on cycle carts and privately.

“If the MC is so serious, they should appoint us on a regular basis, not through outsourcing. How will we run our houses with just about Rs12,000 a month to be paid by the outsourcing firm? The salary will also come late,” said Shamsher Lotiya, president of a door-to-door garbage collectors’ union in the city.