China has acquired a new strategic identity and has made a decisive shift in its maritime approach: Vice Admiral Girish Luthra (retd) 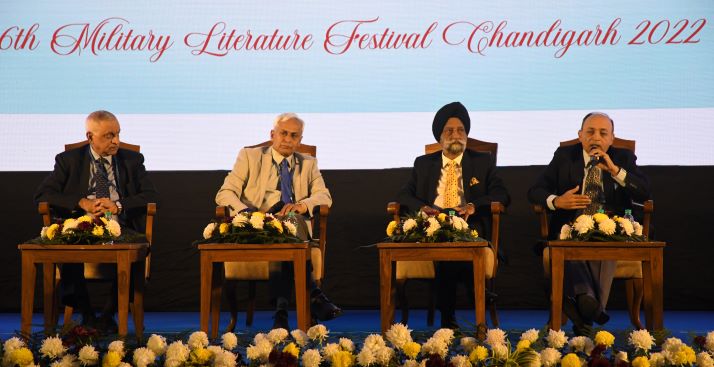 India’s approach in the Indo-Pacific region cannot remain only diplomatic and has to be matched with maritime and naval capabilities, more importantly aircraft carriers, Vice Admiral Girish Luthra (retd) said here on Saturday.

He also said that China, which has an ambition of being a regional and global power, has acquired a new strategic identity and has made a decisive shift in its maritime approach.

Luthra was speaking at the 6th edition of the Military Literature Festival here.

He was taking part in a discussion on 'Relevance of aircraft carriers in power projection.'    Admiral Sunil Lanba (retd), who was the moderator, Vice Admiral Anil Chawla (retd), and Vice Admiral Anup Singh (retd) also attended the event.

"Today Indo-pacific is a very coherent and accepted strategic space. The interconnectedness of this region is what is giving a new dynamism to this region. Within this new development of this region, the maritime areas are the growth underbelly of it," Luthra said.

"This is the period of uncertainty in which we are going through phases like globalisation versus nationalism.

"We are going through traditional security concepts not applicable anymore and almost all countries are following the strategy of hedging," he said.

It is the Indo-Pacific region which is now the area of geopolitical, geoeconomic, and technological competition, he said.

The former vice admiral attributed the primary reason for a newfound attention to this region to its overwhelming stake in the global trade.

He further said that several countries have hammered their strategies to the Indo-Pacific region in light of this changed scenario.

US, Japan, Australia, France, Germany, The Netherlands, European Union etc are some such countries, he said.

Speaking about China, Luthra said, "We have seen in the last 20-25 years the rise of China with a new strategic identity." "China recognises that its ambition of being a regional and global power cannot be fulfilled without suitable positioning and actions in the maritime domain.

"When I say the decisive shift to the maritime orientation, I am not for one moment suggesting that it has given up its continental orientation," he said.

He said China wants to sustain its leadership in trade, wants to have a world-class military by 2035 and win war against its strong adversary by 2049.

He said that in 2008, India came up with the concept of a net security provider in the Indian ocean region. In 2018, the Prime Minister outlined the vision for Indo-Pacific at Shangri La dialogue. And in 2019, the Indo-Pacific Ocean initiatives were announced.

Stressing on the aircraft carriers' strategic, operational, and tactical roles, Luthra said the role of carriers has evolved and adapted in line with the emergence of new technologies.

There are seven countries with aircraft carriers and five other countries which are using helicopter carriers, he added.

"India's outlook and approach in the Indo-pacific cannot only be diplomatic. It has to be matched by suitable maritime and naval capabilities and aircraft carriers play a major role in that.

"We need to prevent domination by another power, particularly in the Indian ocean region, and once again the aircraft carriers have a key role," he said.

The navy man said the opposition to aircraft carriers stems primarily from their prohibitive cost and vulnerability. "I think both these objections are overstated." "Aircraft carriers along with other instruments provide strong deterrence. The deterrence is never to be seen with one single instrument like a carrier; it works in tandem with diplomatic, economic and other instruments of national power," he added.

He said China has also an ambitious plan to have an aircraft carrier which will be the bigger than US' Ford Class, which can carry 100 aircrafts.

China is slowly matching up to the US aircraft carrier, he said.

Admiral Lanba (retd) said India has a rich maritime heritage which dates back 4,000-5,000 years, going right back to the time of Indus Valley civilization.

"India's destiny and future is linked to the ocean, especially the Indian ocean. We sit astride very important sea lines of communication which criss-cross east and west,” said Lanba.