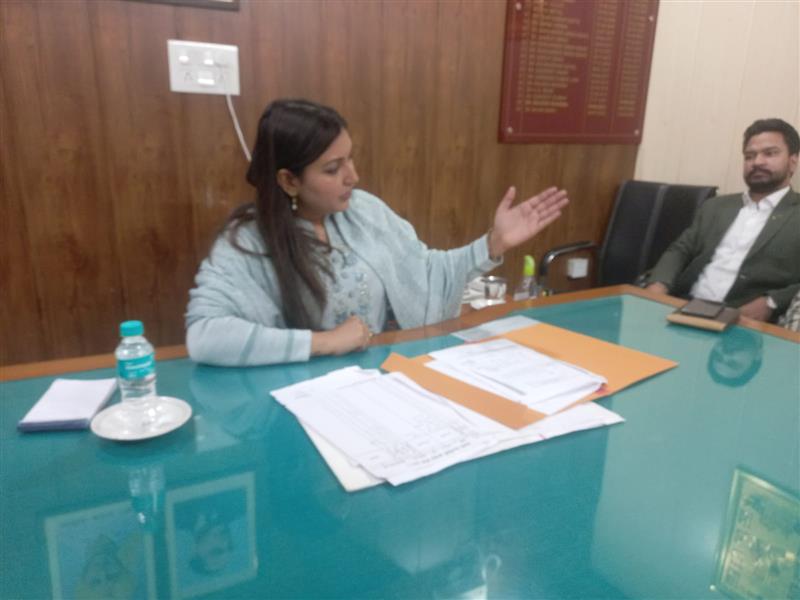 Cabinet Minister and Kharar MLA Anmol Gagan Maan at the office of the Municipal Council, Kharar, on Wednesday.

Cabinet Minister and Kharar MLA Anmol Gagan Maan made a surprise visit to the Kharar Municipal Council (MC) office today and asked the officials concerned to carry out a demolition drive against illegal buildings under construction. She sought the details of the buildings constructed in Kharar during the past five years.

“Bulldozer challva do...,” she instructed Kharar SDM Ravinder Singh. She said a committee be formed and inquiry instituted against the MC officials concerned for approving building plans without verifying the situation on the ground.

In one particular case pertaining to an illegal commercial construction on shamlat land (around one kanal) in a residential area in Kharar by a relative of top SAD MC official, Maan alleged that approval was given under the influence of the top SAD official in violation of rules. When details were sought, the MC officials kept dithering and later on, cancelled the approval, she alleged.

Maan alleged that corrupt officials whosoever would not be spared by her government.

She said a check had been done in the Kharar MC today and it was found that maps were also passed by the committee for some illegal constructions in Kharar. A full report has been sought and the Kharar SDM instructed to ensure the facilities shown in the map by builders.

“Bulldozer challva do...,” the minister instructed Kharar SDM Ravinder Singh. She said a committee be formed and inquiry instituted against the MC officials concerned for approving building plans without verifying the situation on the ground.

Cabinet Minister and Kharar MLA Anmol Gagan Maan said all choes in the Kharar area had been encroached on by carrying out illegal constructions and the mandatory 44-foot space alongside the choes grabbed. “Buildings have been made over choes by turning them into 12-foot drains,” she said.