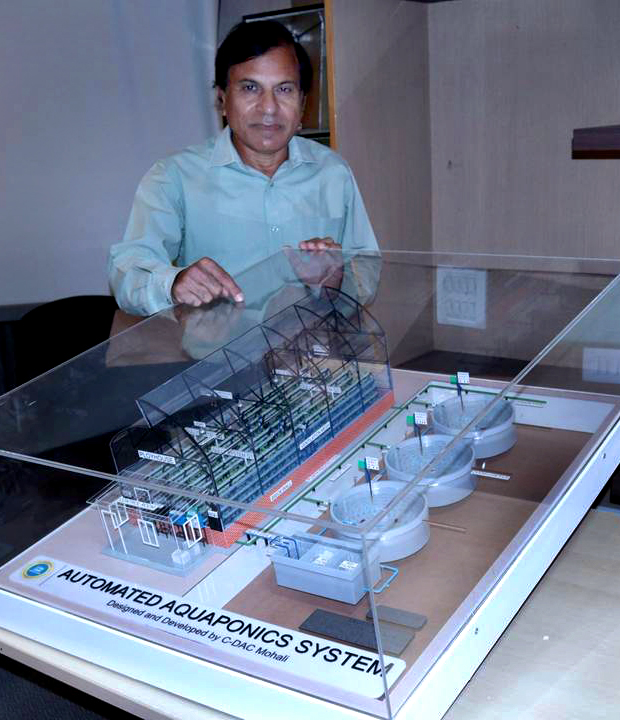 A pilot project to develop the technology was awarded to Centre for Development of Advanced Computing by the Ministry of Information and Technology and a budget of Rs 1.60 crore sanctioned for it. Tribune Photo

The Centre for Development of Advanced Computing (C-DAC), Mohali, has developed the technology for aquaponic cultivation of plants, which is not only environment-friendly but also has high socio-economic benefits for the farming community.

Aquaponics is an emerging technique in which both fish as well as plants complement each other to sustain and grow. The fish waste provides organic food for plants and the plants naturally filter the water which is used to replenish the fish tank. There is no requirement for the use of soil and fertilisers.

“The process is completely organic, increases the productivity of the given land, saves water and also augments the farmers’ income,” Dr PK Khosla, director C-DAC, said, adding: “The technology has been developed and suitable protocols have been evolved for scientists and farmers,” he added.

A pilot project to develop the technology was awarded to C-DAC by the Ministry of Information and Technology and a budget of Rs 1.60 crore sanctioned for it. A plant has been set up at Guru Angad Dev Veterinary and Animal Sciences University (GADVASU), Ludhiana, which is scheduled to be inaugurated tomorrow.

Scientists from GADVASU as well as Punjab Agricultural University, Ludhiana, are also being associated with the project.

Water from the fish tanks is made to flow through horizontal pipes that are fixed on a framework one on top of the other with the required gap to accommodate the plants. Holes are made in the pipes into which small perforated cups, containing plants, are laid. The roots of the plants draw the nutrients from water flowing through the pipes. The pipes can be stacked up to a reasonable height, thereby drastically reducing the area required for the same number of plants to be cultivated.

Aquaponics is suitable to cultivate lettuce, spinach, capsicum, coriander, broccoli and some other leafy plants without the use of soil, pesticides and fertilizers. The area where plants grow is enclosed in a glasshouse-like structure.

According to a scientist at C-DAC, three water tanks with a combined capacity of 54,000 litres, containing three kg of fish, have been installed at the pilot project. The fish would further multiply. This quantity is sufficient to sustain 2,000 plants.

Though aquaponics is a relatively new field in India, it is being used in many parts of the world as it offers a diverse and stable poly-culture system that allows farmers to grow vegetables and raise fish at the same time. While it is ecologically sustainable, aquaponics also reduces pressure on land and cuts down operational costs.