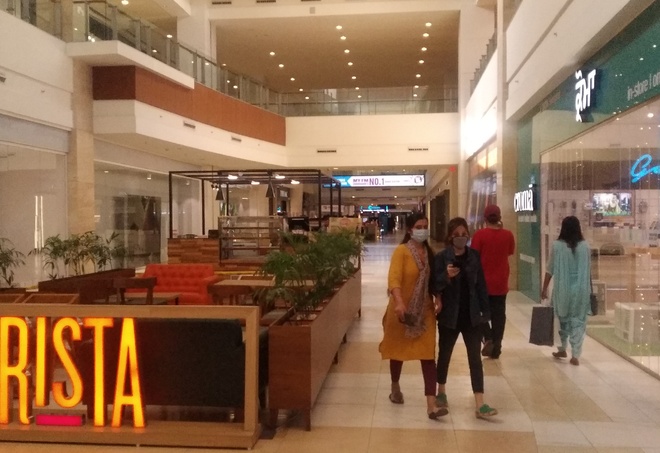 Visitors at the VR Punjab mall in Mohali on Monday. Tribune photo: Vicky

Around 3,000 persons visited the VR Punjab mall, which opened today after two and a half months due to the lockdown to prevent the spread of Covid-19.

The VR Punjab mall, one of the biggest malls in the Kharar area of Mohali, can allow 12,500 visitors daily as per the new guidelines of the Central and the state governments. The mall has a total area of 10 lakh square yards.

People visiting the mall expressed their displeasure as more than 50 per cent shops remained closed today.

Surinder Singh, a resident of Phase IV, said he, along with his wife and son, went to the mall to purchase clothes for his son. Shops of some branded clothes were closed. So, they had to return after purchasing a few items.

Vikas, a resident of Phase VII, who, along with his son, had visited the mall, said they were disappointed as only 50 per cent of the shops were open. They had to return without purchasing anything. Now, they had decided to visit the mall again after a week as the rest of the shops would open by then.

Rishab Mehrotra, Centre Head, VR Punjab mall, said, said of the 140 shops, only 65 were open today. Other shop owners said they would open their establishments later. They can allow 12,500 visitors as per the government guidelines, but only 3,000 people visited the mall till 6 pm today. He hoped that more people would visit the mall in the coming days.

Sanitiser dispensers were installed at several places. Visitors underwent thermal scanning at the entrance to the mall. They also had to show COVA and Aarogya Setu apps on their cell phones to the staff before entering the mall. The entry was based on token system, but there was no time limit for visitors’ stay in the mall. Even shopkeepers were not allowing more than 5 customers in their shops to maintain social distancing.