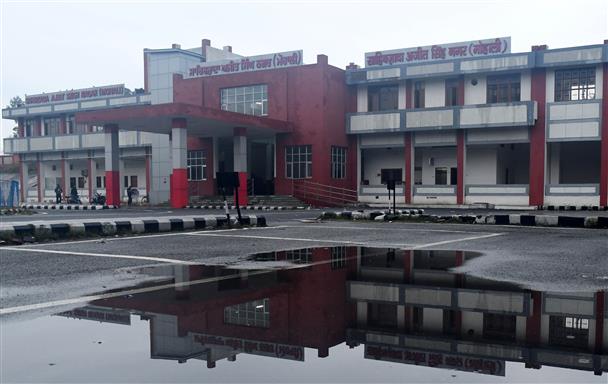 A view of the railway station in Mohali. Tribune photo: Vicky

The Mohali railway station has a chair for a police post. In the absence of any booth, office or post for the Government Railway Police (GRP) and the Railway Protection Force (RPF), passengers have nowhere to go to get their problems related to safety and security addressed. The situation at the station is such that not a single person from the RPF has been posted there and only three GRP personnel take turns to clock a 12-hour shift each for ensuring the safety of passengers.

An RPF official from Chandigarh said, “Till 2019, there was an outpost for the RPF at the Mohali station, but that was removed when the pandemic started. Since then, no booth or post has been given to the RPF; so there has been no deployment of RPF personnel there since the pandemic.”

A GRP official at Mohali said, “There are only three GRP officials here to man the security and safety of the passengers at the station. Each one of us takes turns to clock a 12-hour shift. There’s no room for us, or a post or even an office. We have kept a chair each to sit here at the station. Earlier, there were four of us, but now one person has been shifted to another station in Punjab.” He added, “In case, someone has a problem, they complain to the station master, who directs them to us.”

At present, a total of 16 pairs of trains are plying over the Mohali railway station. “I have not seen a single police official at this station. It’s a matter of concern because this station is located on the outer area of the main city. There should be a designated place for passengers to go and complain in case of a mishap or problem,” said Paramjit Kaur, who was at the station.

Asked, Ambala Division DRM GM Singh said, “We did get a proposal from the GRP and the RPF for making separate offices for them at the Mohali station. I had even earmarked a place where the offices were to be made, on the right side under the ramp at the station. I had issued instructions for the same; I will follow up and see what has been done in this regard.”