17 active cases in the district 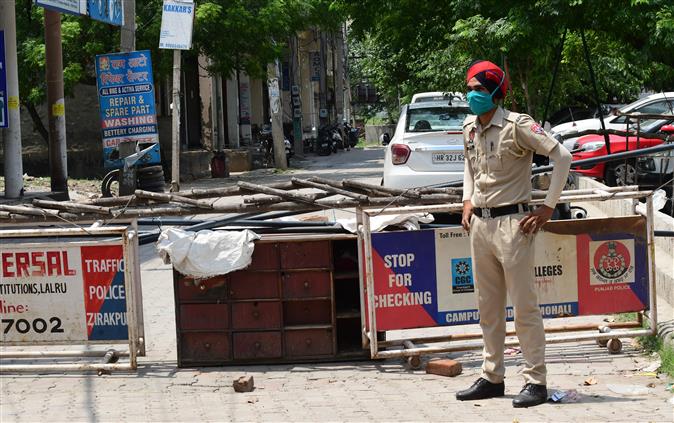 A policeman stands guard in the area where two people tested positive for COVID-19 at Modern Complex at Baltana, Zirakpur, on Wednesday. Tribune Photo: Ravi Kumar

A 40-year-old man and a 28-year-old woman from Banur’s Naggal Salempur were tested positive.  The woman was pregnant and was found having the infection during a prenatal check up.

District authorities have sealed off the house and medical teams have begun tracking and isolating their contacts.

A Class 4 employee working at a local health centre tested positive in nearby Dhakoli.

Two men in their thirties---a 39-year-old from Dera Bassi and a 36-year-old from Mohali’s Sector 78---were the district’s other two cases.

The developments take the number of COVID-19 cases in Mohali to 123, officials said---although Punjab government's official coronavirus tally for the district still stands at 120.

There is ususually a lag between district tallies and the the state's official tally.

Moihali has 17 active COVID-19 cases currently, and has reported three deaths so far.