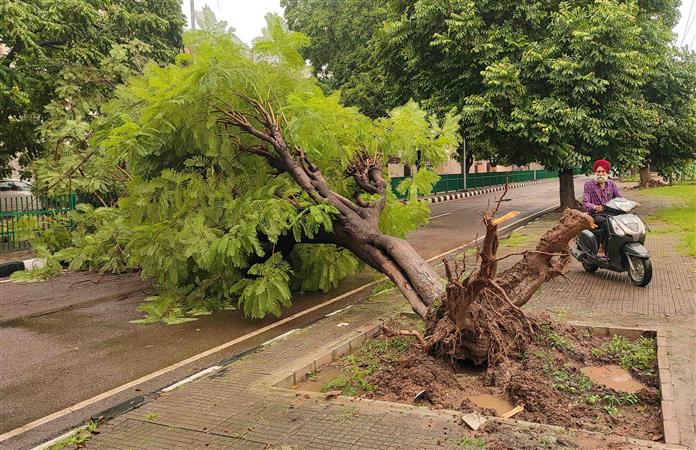 A scooterist rides around an uprooted tree on the road separating Phases 9-10 in Mohali on Sunday. NITIN MITTAL

Overnight rain uprooted trees, snapped branches, disrupted electricity supply for most part of the day, flooded roads and caused cave-ins in Mohali, Zirakpur and Kharar areas. Three trees were uprooted this morning on the road separating Phases 9 and 10, near the PCA Stadium, bringing the traffic to a halt on the stretch.

Snapped tree branches kept PSPCL officials on the toes at several places as residents remained without power in several areas, including Phases 9, 10, 11 and 3B2.

Most of the service roads and parking areas of markets on the Airport Road remained waterlogged, resulting in financial loss to businessmen, who remained busy pumping out rainwater. Municipal Corporation as well as PSPCL officials had a busy day as repair work stretched till late in the evening.

Officials said there was no major damage but there were several spots that needed repair. Senior Deputy Mayor Kuljit Bedi said MC teams had been deployed and repair work might take some time to complete. Residents in several housing societies complained of waterlogging on the inner roads of Mohali, Zirakpur and Kharar.

Further, five power poles fell and two feeders were damaged as eucalyptus trees fell on them on the Ambala road and Dhakoli.

Zirakpur Executive Engineer HS Oberoi said: “The PSPCL staff have been working round the clock since last night to restore the supply. The damage isn’t heavy but repair work is being carried out.”