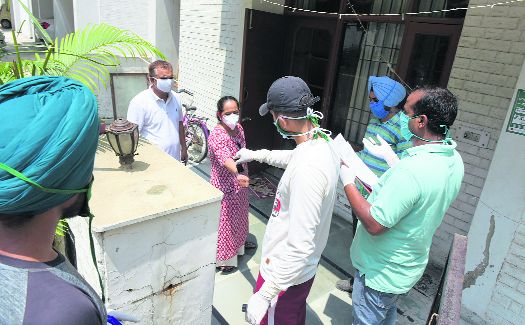 A Covid-19 contact-tracing team of the Municipal Corporation puts contacts of a patient under home quarantine in Sector 51, Chandigarh, on Saturday. Tribune Photo: Manoj Mahajan

Covid-19 claimed yet another life in the district today, raising the toll to 19.

The victim, a 62-year-old man of Sector 68, was suffering from diabetes and hypertension and was admitted to Gian Sagar Hospital in Banur some days ago. His condition had been critical and he was put on a ventilator on Friday night. The man succumbed to the virus this morning.

Meanwhile, the district witnessed a highest spike of 95 cases of coronavirus today. The number of infections has now jumped to 1,264.

This is the highest single-day spike in the tricity till date. Panchkula reported its biggest single-day spike of 62 cases today while Chandigarh had reported it on August 5 when 64 cases had surfaced in the city. Civil Surgeon Manjit Singh said LIC Colony in Mundi Kharar and Sector 115 were declared micro-containment zones as more than five cases each surfaced from these areas.

He said all new patients were contacts of Covid patients. Zirakpur reported 24 new cases today, Mohali city 20 and Kharar and Dera Bassi 12 each. Ten cases were reported from Kurali, four from Lalru and one each from Sultanpur, Banur, Dappar, Manana, Saneta, Nayagaon, Daun, Saidpura, Bhagwanpura, Bhagomajra, Sohana and Mataur villages.

Deputy Commissioner Girish Dayalan said considering the continuous surge in Covid cases in the district, the Mohali administration has put ‘Covid Spike Management Plan’ into action. “Learning from the worldwide pandemic spread, we expected the cases to surge at any given point of time. So, we prepared a spike management plan and made it operative now,” he added.

As many as 26 patients recovered from the disease and were discharged from the hospital today. The number of recoveries rose to 674 today while there are 571 active cases. — TNS