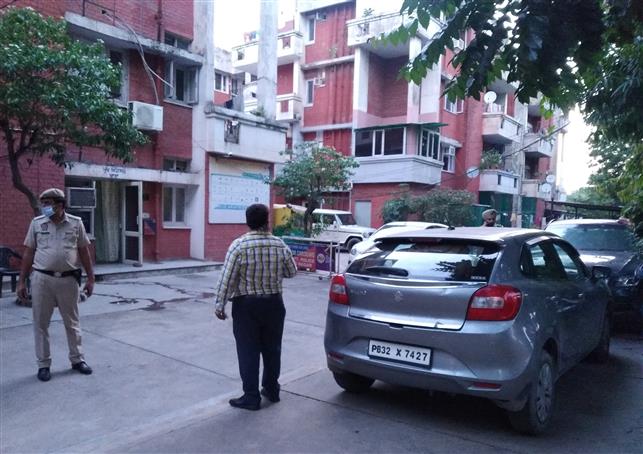 A view of the seized Baleno car of the accused who in Phase 10 Mohali on Monday. Tribune photo: Vicky

High drama was witnessed in Phase 10 market when an unknown person pointed a gun at a food delivery boy to snatch his motorcycle and also threatened a cop with his gun.

As per the information obtained from ex-councillor Gurmeet Singh Walia, the miscreant was stopped by PCR party opposite housing flats in Phase 10 this evening. The cop and the person exchanged heated arguments before the latter sped away on his Baleno car.

After some time, he was again asked to stop near Phase 10 main market by the cops but on seeing them, he came out of his car and fled from the spot towards showrooms leaving behind the vehicle. Then the miscreant pointed his gun at a food delivery boy and snatched his bike.

When the cop tried to nab him after chasing him, he also pointed the gun towards the cop and sped away on the bike.

According to the sources, the snatched bike was later recovered near Burail jail in Chandigarh.

SP (investigation) Harmandeep Hans said, “At present, nothing is clear about what had happened in the market. We are investigating the matter. The Baleno has been taken in police custody. Nothing suspicious found from the vehicle yet. We are also rounding up few persons for questioning.”

The police was also scrutinizing the footages of CCTV cameras installed in the market.

Inspector Jagdeep Singh, SHO of Phase 11 police station, did not respond to the calls despite several attempts.