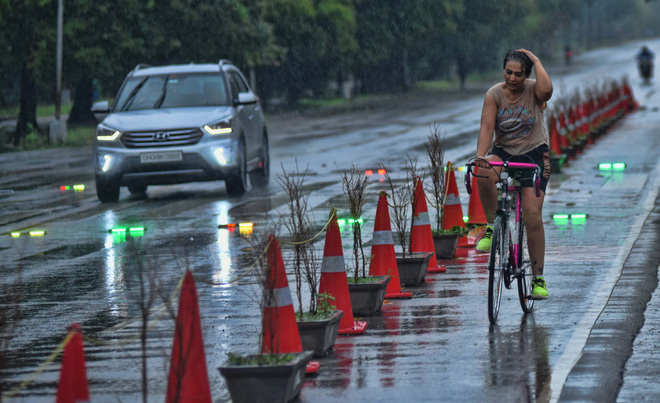 A cyclist seems to be enjoying the rain in Chandigarh on Sunday morning. Photo: Pradeep Tewari

The monsoon arrived in the city today, around 10 days earlier than expected. According to the Chandigarh Meteorological Department, the monsoon was evident from the regular rain and it had arrived earlier this year.

Shivinder Singh, a senior official of the Met Department, said the city was likely to witness a normal monsoon. Meanwhile, 20.6 mm of rainfall was reported today.

According to weatherman, cloudy sky and light rain is expected during the next three days. Light to moderate rainfall (1-3 cm) at many places with isolated heavy rainfall (6-7 cm) is likely to continue over Punjab, Haryana and Chandigarh over the next 48 hours. Isolated thunderstorm with lightning and gusty winds (30-50 kmph) is expected during this period. Thereafter, rain and thunderstorm

activity is likely to increase from early morning hours of June 15 to 16. During the two days, light to moderate rainfall (1-5 cm) is expected at most places with heavy to very heavy rainfall (7-12 cm) at some places. — TNS