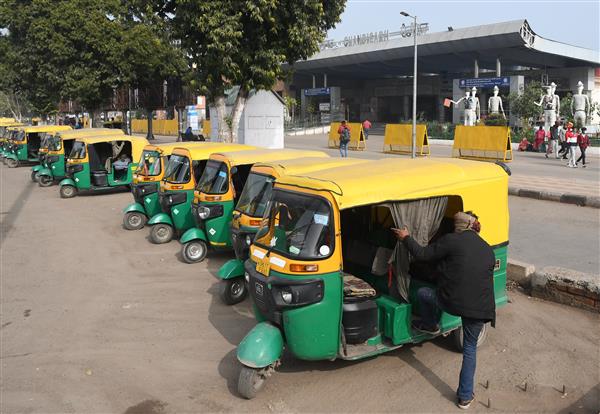 Autos parked outside the Chandigarh railway station on Saturday.

In the absence of regular checks on documents related with vehicles and identities of auto drivers at the Chandigarh railway station, a sense of insecurity envelops rail passengers who have now started to opt for trackable commuting via travel apps.

On a regular day, hundreds of autos do the rounds of the city railway station hoping to get a potential customer. The single-lane auto route is painted with the green and yellow of the autos parked along the lane. It gets busier when the train drops off passengers at the station; the auto drivers shout from a distance: “Auto chahiye, madam? sir? (Do you need an auto, madam/sir?)”, “Kaha jaogay? (Where can I drop you?)”. For those who fancy the idea of “penny saved is a penny earned”, an auto ride comes as a cheaper option. But safety comes with a price tag.

Deepika Kaur, an HR executive in a Delhi-based company, often shuttles between Delhi and Chandigarh. “My parents stay in Mohali, so I come and visit them every week. I don’t drive in Delhi, so a train journey is a viable option for me. However, I am a little scared to take autos. Firstly, I don’t know if the auto driver is vaccinated, given the pandemic.

Then, I don’t know if he has all his papers in place. It’s not safe. So, I book an Ola or Uber cab instead,” she says.

But things aren’t as rosy for Neelam Devi, who travels to Sitapur in UP every year. She works as a domestic help in Chandigarh and often takes autos when she has to travel in the city and doesn’t have her bicycle. “When I go to my village, I usually take an auto and reach the station. Then I come back on the auto. It’s cheap, I don’t have the money to book a cab and I can’t afford it either. I don’t feel very unsafe, but that is probably because I choose to travel during the day,” she says.

Asked about the frequency of checks on auto drivers, an official from the GRP said, “We are already short-staffed. Almost every other day, we find bodies of people who get hit by trains or are murdered. There are more important issues at hand for us to deal with.”