No lane for parking, oblivious visitors made to pay hefty penalty at Chandigarh Railway Station : The Tribune India 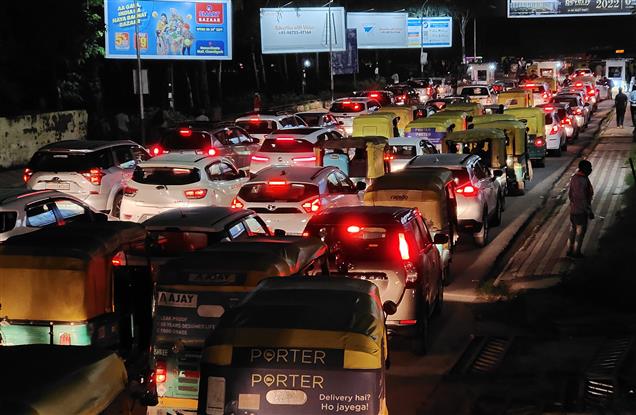 Vehicles line up at the fee collection booths while exiting the Chandigarh Railway Station on Tuesday evening. Most visitors complained of being levied penalty for breaching the 6-minute limit. Ravi Kumar

In the absence of a separate lane for general parking, confusion prevails among visitors unaware of the new pick up and drop off system introduced at the Chandigarh Railway Station.

Pick up and drop off tickets are being issued to unsuspecting visitors, who, oblivious to the hefty penalty, fail to specify that they intend to use the general parking. Those exceeding the six-minute limit, despite having parked their vehicles in the parking area, end up paying between Rs 200 and Rs 1,000 on exit.

The parking contractor is yet to set up a separate lane for general parking, as a result of which vehicle owners are forced to use the pick up and drop off lane.

A retired Army officer said he had gone to pick up his daughter, who had arrived in the Shatabdi Express. While exiting, the parking attendant asked for Rs 1,000. On objection, the attendant allegedly misbehaved with him.

He reasoned the charges were unrealistic as he was held up in a long queue of vehicles at the exit point due to the rush. He claimed around five persons blocked his car, as if he had committed a crime.

A random visit to the railway station in the evening, when the Shatabdi Express arrives, revealed most of the vehicle owners ended up paying Rs 50 to Rs 200 for exceeding the six-minute time limit. Most of them complained of being held up in long queues inside the zone.

For his part, parking supervisor Shashi Kant said there was some confusion among visitors in the initial days, but with the passage of time, people were getting aware of the new system. He said the general parking lane would be ready in a couple of days.

Caught in jam, many penalised

People planning to park vehicles in general parking should mention that to ticket vendor. They will be charged Rs 30 for first two hours. — Shashi Kant, parking supervisor