No let-up in dengue cases in Panchkula district 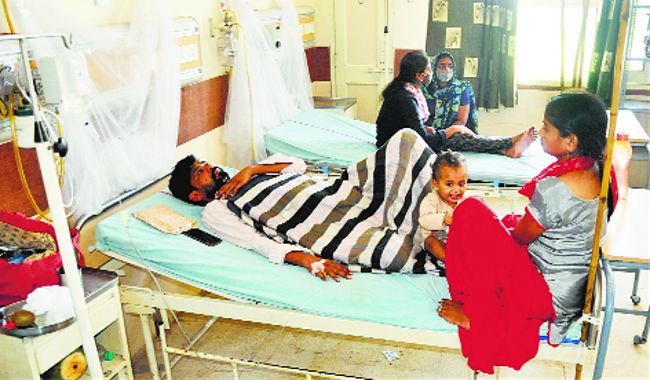 Patients admitted to a dengue ward at the Civil Hospital in Panchkula on Wednesday. Tribune photo: Ravi Kumar

With 31 fresh cases, the official dengue tally breached the 200 mark and settled at 229 in the district on Wednesday.

The district, which saw only five dengue cases till the end of August, has witnessed a massive surge in the cases since the past month.

Though the district health authorities claimed to have been taking all measures to prevent the spread of vector-borne diseases, there seems to be no let-up in dengue cases.

The Sector 10 RWA claimed another dengue death in its locality after the Chandigarh Tribune published a news report, “Private hospital disputes dept’s claim of no dengue death in Panchkula”.

However, the Health Department has not yet updated its dengue toll for unknown reasons, keeping it to zero.

According to officials at Alchemist Hospital, Sector 21, the hospital has so far witnessed eight fatalities due to dengue and three of the patients who died of the disease were from Panchkula.

Terming citizen participation paramount, the Health Department is also engaging RWAs of various localities to contain the infection by preventing breeding of mosquitoes.

Panchkula CMO Dr Mukta Kumar couldn’t be contacted for her remarks on the issue.

According to the dengue bulletin, out of a total of 2,610 dengue serology samples taken so far, 229 persons have tested positive.