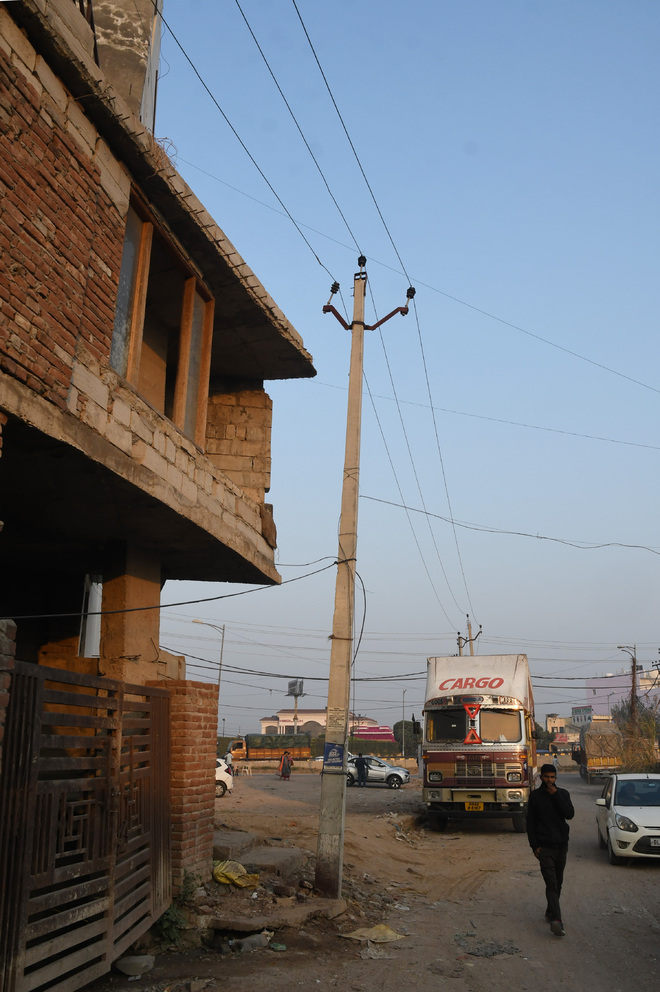 High-tension wires passing by a building in Zirakpur. RAVI KUMAR

High-tension wires passing dangerously close to several buildings in Zirakpur and Baltana have claimed a life and injured two persons in the past two months.

Instances of persons coming in contact with electricity wires in the area have become common with at least one fatality being reported every year along with numerous cases of electric shock.

In the latest case, a 19-year-old youth died on Sunday while his friend was injured while trying to save him on the first floor of a hotel. The deceased, Kamlesh, and Davinder Kumar were working and staying at Royal Park Resort. Kamlesh’s body was charred and mutilated after coming in contact with a 11,000 volt power line. The incident took place when the victim was having lunch while sitting on a railing. He lost the balance and touched the wires.

Sub-Inspector Rajesh Chauhan said the police had recorded a statement of the victim’s family under Section 174 of the CrPC.

On October 28, a seven-year-old girl in Anand Vihar of Baltana had come in contact with a high-tension wire while playing with her friends in the balcony of the first floor of her house. She had to be taken to the PGI.

Anand Vihar residents alleged that in many colonies of Baltana, power lines were running directly over the road or dangerously close to the buildings.

In the past, fatalities due to electrocution have been reported from Krishna Enclave, Motia City and the Peer Muchalla area also.

“Colonisers know how to raise buildings without caring about violations. Neither PSPCL nor Municipal Council officials are held accountable. Due to the lack of any formal complaint, the police investigate cases of electrocution under Section 174 of the CrPC, and the matter ends there only,” said a Baltana resident not wishing to be named.

PSPCL officials said power lines were running over the main road, which was an aberration, but also pointed out that there were numerous illegal and unauthorised colonies raised by fly-by-night colonisers. “Nobody allows a pole with high-tension wire to be erected near his house. The electricity lines were laid long before the building came up. It is the construction activity that is going on mindlessly,” said a PSPCL junior engineer posted in Baltana.

In 2016, seven persons died due to electrocution while in 2017 two persons had lost their lives. Not only high-tension wires, naked wires hanging loose are a common site in several areas of the town.

The possible solution to the problem lies in underground cabling of power lines but it looks like a distant dream. In 2017, the Municipal Council had mooted a project for underground cabling in some parts of the town but there has been no headway in the project.