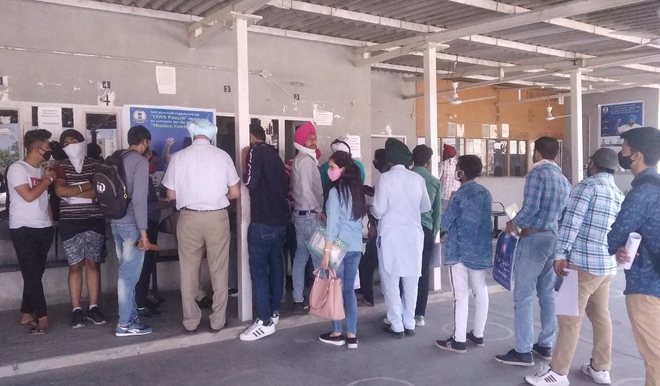 A long queue at the Regional Transport Authority office in Sector 82, Mohali, on Friday. Vicky

Brace yourself for a tough time if you want to get a driving licence in Mohali as with a single counter to deal with visitors, you can end up in a queue for hours despite an online appointment. More importantly, before you reach the Regional Transport Authority (RTA), Sector 82, make sure your mobile phone’s Internet pack is recharged as you may be asked to lend your mobile data in case the office Internet is not working.

The social distancing norms were openly flouted by visitors with no official keeping a check. There were no arrangements for sanitisation.

Due to poor Internet connectivity at the RTA, visitors were asked to lend their mobile data. Several visitors shared their data, which helped in resuming the services.

"What is the use of giving us an appointment when we have to wait for such a long time. - Sahil Verma, Visitor

The scene was no different there today as despite prior appointments, applicants ended up in queues for hours.

Sahil Verma, who was among the visitors, said he had filled a form for a learner’s driving licence and had got an appointment for 11 am. He reached at 10.30 am since it was mentioned that the applicant should reach at least 20 minutes before the appointment. However, he had to wait in a queue for two and a half hours as only one counter was functional where the documents of the applicants were being verified. “What is the use of giving us an appointment when we have to wait for so long,” he said.

Another visitor, Anzar, a web technician who had applied for a licence, had a similar story to share about long queues.

“I reached the office sharp at 11 am since I had an appointment. However, I had to wait in a queue till 1 pm when my documents got verified before getting a picture clicked for the DL,” he said.

Interestingly, the Internet of the office suddenly stopped working following which the person sitting at counter number 2 requested the visitors to share their mobile phone data through hotspot. Surprisingly, there was no separate queue for senior citizens and women.

Karnail Singh Chhokar (68), who had arrived to get his driving licence renewed, also had to wait for at least 90 minutes before he could manage to reach the counter.

An official present at the office said on condition of anonymity that due to the transfer of a clerk, the burden had increased on the two clerks who were on duty.

Sukhwinder Kumar, RTA, Mohali, said today there was some issue with the Internet due to which the process got hampered, which led to long queues. “I was apprised of the problem and we have registered a complaint to ensure that the Internet works smoothly. We will open more counters to deal with long queues”, the RTA said.

He said the ATO was recently transferred to Ropar due to which he had decided to remain present in Sector 82, at least twice a week to monitor smooth functioning.