Open house: What are your expectations from the draft electric vehicle policy? : The Tribune India

Open house: What are your expectations from the draft electric vehicle policy? 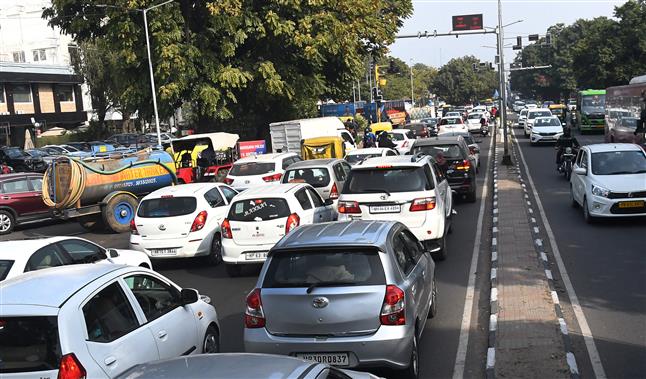 In order to reduce air and noise pollution, and dependence on fossil fuels, the UT Administration has decided to promote electric vehicles in Chandigarh. File photo

It is really appreciable that the Chandigarh Administration is coming up with an EV policy. This is the need of the hour. The Administration should take steps to replace the entire fleet of the local buses with electric vehicles. People should be granted some incentives for using battery-operated vehicles. There should be a subsidy of at least Rs50,000, along with free charging stations and parking, for electric vehicles.

Even after seeing a surge in Covid cases, residents are found throwing all caution to the winds by not wearing masks and violating the social distancing norm. What steps should the UT Administration take to ensure strict enforcement of Covid- compliant behaviour other than allowing only vaccinated individuals to visit public places?

The EV policy must be welcomed as an effective and sustainable tool to overcome the problems of climate change and pollution. Before its implementation, it should be ensured that there is a clear and effective support system such as setting up a maximum of charging stations, giving subsidies to consumers buying electric vehicles and also encouraging behavioural change among masses by holding various awareness drives highlighting the benefits of this policy.

EVs the need of the hour

Give priority to public transport

All public transport vehicles be replaced with EVs in the first phase. The UT Administration should ban the entry of old diesel vehicles into the city. Many ill-maintained trucks, three-wheelers and rickshaws fitted with old engines ply on the city roads with impunity. These vehicles cause excessive pollution which can defeat the purpose of the EV policy. There is a need to fix the responsibility of traffic police with regard to challaning unfit and overloaded vehicles on a regular basis so that air pollution is kept within the permissible limits.

The policy on electric vehicles should not be a mode to fleece people by issuing hefty challans. Certain areas should be earmarked for electric vehicles where their batteries can be charged by paying a nominal fee.

To get a relief from the rising pollution levels, bringing electric vehicles on the city roads by the UT Administration with mandatory provisions in its policy will be welcome by one and all. It will be desirable if the draft policy takes into consideration the cost effectiveness involved in such a switch over. Since the existing vehicles cannot be discarded overnight, a reasonable time frame will be allowed to vehicle owners to go for the new versions, as well as to facilitate the availability of a conversion mechanism in the market. Since power consumption will go up considerably, generation should be augmented to meet the additional demand.

It is good news for the residents that the UT Administration is thinking of unveiling its EV policy. The residents expect that the policy be notified only after ensuring proper infrastructure for EVs such as sufficient charging stations and parking space. There should be incentives in the form of road tax exemption and cheap electricity for the owners of electric vehicles. These vehicles have no gear and clutch, thus are easy to drive. Their maintenance will be cheap. As a matter of fact, it will lead to a healthy environment of Chandigarh.

Not a feasible idea

To introduce electric vehicles is a good move as it will reduce noise and air pollution. Before launching the policy, the Administration must ensure that there are sufficient charging stations in the city to meet the demand of such vehicle users. Giving free parking space to e-vehicle owners will be an injustice with the owners of fuel-based vehicles. The Administration must do its home work well before implementing the policy.

The Government of India has committed that it will reduce carbon emissions by 45% till 2030 and there will be 0% emissions by 2070. Many experts believe that these are very ambitious targets for a country like India, which is dependent mostly on fossil fuel for its energy needs. The Electric Vehicle (EV) project is also a step to reduce carbon emissions. As the Chandigarh Administration is going to launch its draft policy shortly, we expect the following: The draft and approved policy should be valid for a period of 30-40 years. There should be concessions in the cost of e-vehicles as well as road tax and buyers be given loans at low interest rates. A sufficient number of charging stations should be set up. There should be a clear policy for the scrapping of old vehicles as well as EV vehicles after a fixed period of time. The prices of spare parts and replacement batteries should be reasonable.

Residents have a lot of expectations from the draft electric vehicle policy being unveiled by the Administration. It may hugely benefit the Administration, vehicle users, businessmen and the environment. However, it should be ensured that the policy doesn’t cause losses to the general public. Sufficient time must be given to the users of diesel vehicles.

The aim of the policy is to reduce pollution in the city. There is a need to provide e-vehicle users with a short and convenient solution to their charging needs. There should be no registration, fine, road tax and parking charges for these vehicles. These vehicles must be made affordable by temporarily reducing the GST rate.

The policy must incentivise buyers of electric vehicles by waving registration fee, road tax and 50% MC parking charges. There should be no limit on e-autorickshaw permits, though these can be allowed to ply on a limited number of routes in the city. There must be a subsidy on the purchase of these vehicles and there should be no purchase limit.

Subsidy target should be practical

A three-member committee set up to finalise the draft of the electric vehicle (EV) policy of Chandigarh has picked loopholes in the draft policy. The committee members, at a recent meeting, questioned several proposed features such as the quantum of subsidy to be given, subsidy targets, a ban on petrol two-wheelers from the next financial year and the methodology on which the policy is being prepared. It was suggested that rather than the arbitrary fixing of subsidy, it should be calculated by incorporating actual market costs and resale value of vehicles. The draft advocates subsidies to vehicle buyers, which is expected to act as a major incentive to people to move from fossil fuel-based vehicles to electric vehicles. The subsidy target should be practical and based on the actual new vehicles being registered. Adequate charging points across the city should be set up.

The introduction of 60 electric vehicles is a welcome step before the unveiling of the e-vehicle policy. The next most important step should be to set up an adequate number of charging stations. Persons opting for these vehicles should be provided subsidies. A special drive should be held to give incentives for replacing fuel-based vehicles with e-vehicles. More funds should be provided for R&D to improve the present designs of e-vehicles to ensure safety, reliability, reduction in cost and ease of handling.

It is heartening to note that the UT Administration is rolling out a draft electric vehicle (EV) policy. A recent study says electric cars generate half or less than half the emissions caused by fuel-based cars. And with the rising fuel prices, both the private and public transport become expensive. So, buying electric cars makes a lot of sense. But the policy should take care of the teething problems which are expected to plague the EVs. There should be sufficient charging infrastructure in the city. Dedicated parking lots for electric vehicles must be earmarked across the city. There has to be standardisation of equipment to be used in the infrastructure to meet the global norms of the EV ecosystem. A sufficient number of service centres should be set up by the administration.

People have a lot of expectations

The Chandigarh Administration is soon going to unveil the draft electric vehicle policy. We expect from this policy that electric vehicles should be affordable, comfortable, eco-friendly, of good quality and easily available. Incentives and subsidies should be provided to buyers. There should be a good charging infrastructure. This policy should be beneficial for us.

Apart from financial incentives, free-of-cost dedicated charging stations and green zones for electric vehicles should be provided. The people of the city expect incentives in the form of subsidies and reduced road tax for electric vehicles. The Administration should give a chance to local start-ups to provide spare parts. We request the Administration to be liberal with infrastructure spending and make installation of charging stations mandatory in all official and residential areas.

There are some issues with e-vehicles such as limited charging stations in the city, limited capacity to run on a full charge and high cost. The government should give heavy subsidies on the purchase of electric vehicles. Mobile charging stations should also be arranged.

Electric vehicles are a good option for the country as these will help check the pollution levels. The city has a few service stations for e-vehicles and charging stations. Even the cost of electric cars is high. The Administration should promote both solar as well as e-vehicles in the city, especially in the commercial sector, by giving good subsidies.

The electric vehicle policy should be formulated after taking feedback from all stakeholders. Suggestions, comments, clarifications and inputs should be considered by the authorities to make the policy widely acceptable in the public. Moreover, the policy should be a long-term step and free of ambiguities. We expect the EV policy to give a maximum of subsidy on the purchase of e-vehicles. The subsidy should be transferred to the beneficiary digitally. The need for setting up more charging stations should be taken care of.