Open house: What steps Admn must take to save residents from road mishaps in Zirakpur? : The Tribune India

Open house: What steps Admn must take to save residents from road mishaps in Zirakpur? 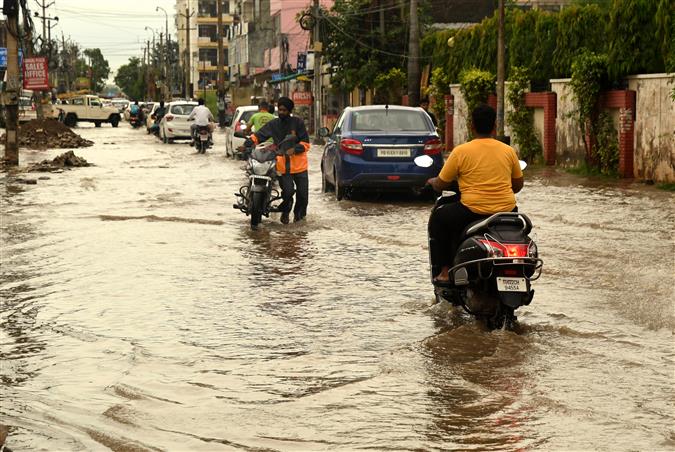 Commuters find it difficult to cross a waterlogged VIP Road after it rained heavily in Zirakpur. File photo

Experts need to be consulted

Tragic incidents during monsoons are no longer a surprise in Zirakpur. Experts need to be consulted for permanently fixing the waterlogging issue. But some steps, which can be taken, are also not considered. The authorities must at least repair roads and remove encroachments. This can prevent accidents.

Various departments of the Chandigarh Administration have launched online services. Has this made any impact on delivery of services or it’s just on papers. What more needs to be done to make online facilites efficient?

Open electric wire boxes of streetlight poles and dangerously hanging wires of transformers are a common sight. Potholes on roads turn into death traps during the rainy season. The administration should repair roads at regular intervals. There must be periodical audit and inspection of electric polls and transformers to check loose wires and connections. Accountability of officials concerned must be fixed for any negligence in maintenance of transformers and related infrastructure.

Gear up to tackle water-related issues

The condition of Zirakpur roads and the area under the flyover poses threat to lives of commuters. The electrocution of shopkeeper highlights insensitivity of officials responsible for providing safe power supply to consumers. City gets flooded when it rains and commuters on roads bear its brunt. Haphazard and unplanned construction in Zirakpur has put an extra load on infrastructure. The administration should make all arrangements to tackle water-related issues before the onset of the monsoon.

Due to unplanned and haphazard construction in Zirakpur there is no space left for footpaths, electricity poles and sewer, water and rainwater pipelines. All encroachments on roads should be removed. Transformers and high tension wires should be relocated to nearby suitable places. Municipal works are perennial in nature. So, sufficient employees must be deployed for regular maintenance works.

Regular inspections need of the hour

The Municipal Council should conduct regular periodic inspections while constructing roads, buildings and other infrastructure. The MC should have experienced civil engineers on its panel to conduct regular inspections during the ongoing construction. Engineers must certify materials used to construct roads and other infrastructure. They should be held responsible in case roads get damaged in short span of time.

Administration has to be proactive

Broken roads and damaged electricity poles are nothing, but negligence on the part of the departments concerned. No one is concerned about residents and their families. Only monetary compensation to victims’ kin is not sufficient. Timely maintenance of infra must be undertaken before the onset of monsoon. There should be no room for complacency. The administration has to be proactive.

Laxity on part of officials

Civic bodies are allotted funds for recarpeting roads and filling potholes. But there is a sorry state of affairs. No one knows where funds go. Precious lives are snuffed out on potholed roads every year during monsoon. This shows laxity of officials concerned. Officials must be accountable for lapses in maintenance of transformers and electricity poles.

Knee deep potholes in on the VIP road show apathy of Municipal Council officials. A young man getting electrocuted is gruesome and highlights negligence of officials of the Electricity Department, who didn’t take care of naked wires of a transformer hanging near to the road. Such irresponsible officials must be suspended. Kin of the deceased must be compensated.

Zirakpur becomes a virtual hell during heavy rain. The Municipal Council collects from residents. But taxpayers are left to fend for themselves as the infrastructure is crumbling in the town. Vehicles often breakdown on waterlogged roads and the traffic comes to a standstill. A master plan needs to be put in place to make underground drainage system work flawlessly. The Met Department gives an almost accurate forecast. But the local authorities fail to take proactive measures every time. Extra safai karamcharis must be deployed to remove blockage in the sewer system. The infrastructure must be upgraded from time to time.

All inner roads must have street lights

The condition of roads in Zirakpur is pathetic. Waterlogging affects movement of vehicles and creates traffic bottlenecks. Potholes on roads, no rainwater drainage system and no streetlights on roads make commuting difficult for two-wheeler riders. An accident could happen on a patch outside Swastik Vihar, a society on Patiala Road. The department concerned must take action to prevent any mishap in front of society gate. There must be street lights on all inner roads of the town.

Potholes must be repaired with advanced eco-polymer techniques and rapid setting concrete. Exposed electric wires should be covered on priority. Soak pits must be constructed along road sides to drain rainwater. All roads must be recarpeted to reduce accidents.

Safety audit must be conducted

It is unfortunate that young man was electrocuted in Zirakpur. Lose wires hanging on electric poles is a common sight. The Electricity Department should conduct safety audit of wires right from poles to meter point. This audit should be completed before the onset of monsoon. Also, the authorities concerned must pay compensation to the family of the deceased.

Crumbling infrastructure in Zirakpur claimed man’s life, who was electrocuted on a potholed road. The administration should take action against those official whose negligence caused such an incident. Officials must ensure that there are no loosely hanging high tension wires on roads and commuters remain safe.

A 28-year-old shopkeeper, the only son of his family, was electrocuted on a potholed road in Zirakpur. The incident has raised many questions, which the authorities concerned have ignored. Also, it has exposed tall claims of the authorities’ preparedness before the onset of the monsoon. Potholes on roads must be filled before it rains. All must raise their voice to get the infrastructure upgraded in the town.

Put up fences around transformers

It is the laxity on part of the administration that roads in Zirakpur are either broken or full of potholes. Regular recarpeting of roads should be done to avoid mishaps. Transformers should have a fencing. An online portal can be launched by the PSPCL on which pictures of lose and dangling wires can be uploaded and timely repair can be initiated by the authorities.

Use quality material in road construction

Heavy monsoon this year has damaged almost all roads in Zirakpur. Immediate recarpeting of roads is required. The MC authorities should follow laid out procedures for the construction of roads as per the civil engineering practices. Quality material must be used in construction so that roads last for minimum 10 years. Besides, the road network, local transport, electricity infrastructure, sewage disposal systems and water supply arrangements are not sufficient for the needs of Zirakpur residents. The authorities concerned must stop further construction in the town and instruct developers and builders to first provide necessary infrastructure in their existing housing societies.

A shopkeeper was electrocuted in Zirakpur. This shows negligence of the department concerned. The Electricity Department should take urgent steps to avoid incidents like electrocution. Naked wires are often seen on the lower portion of electricity poles. Regular supervision and maintenance should be undertaken of power supply poles and transformers. Officials concerned must be held responsible for any casualness in their works.

Everyone knows that a small hole will sink a big ship. Success demands perseverance. All shortcomings in infrastructure should be removed. Naked electric wires and boxes are dangerous. These should be covered. Extra staff can be deployed to upgrade infrastructure and make preparations to deal with any situation before the onset of monsoon.

The onus lies on the civic body and the Electricity Department. The former should inspect and immediately repair all potholed roads before onset of the monsoon whereas the latter must ensure that all low lying electricity wires are properly tied and covered. All underground wires must be checked in order to prevent leakage of current especially during rains. Also, it’s duty of the administration to instal signboards at the vulnerable spots so as to prevent the loss of precious lives.

Admn has to act more responsibly

It’s really pathetic to see potholed roads in many parts of the tricity especially Zirakpur. The issue becomes more prominent in the monsoon season. The Administration has to act more responsibly and be accountable. There has to be a plan to repair roads before the onset of the monsoon season. Innocent lives are lost due to the careless attitude of the Administration. A mobile team can be constituted to identify dangerous spots where deep potholes have surfaced. Such spots should be demarcated by signages or red flags.

Infra maintenance should be top priority

Top priority should be given to maintenance of available infrastructure in the town. The woes of Zirakpur residents are never ending because of mushrooming buildings resulting in over population and incoming vehicles from all directions. Bypasses should be constructed to divert traffic. Traffic meant for Haryana and Punjab should be diverted. Illegal constructions along inner and main roads must be removed. Loose electric cables dangling dangerously must also be removed. Junction-boxes should be covered.

Zirakpur is the fastest growing satellite town of the UT, struggling for basic amenities. Its population is increasing at fast rate. With this, demand for basic infrastructure is also increasing. The government intervention is needed to use land wisely. Agricultural land should not be used for commercial or residential purposes. More open spaces with greenery are required to manage pollution in the town. No new land should be allotted for residential or commercial use. More construction means more traffic congestion and extra burden on existing infrastructure.

A man in Zirakpur got electrocuted due to negligence of Punjab State Power Corporation Limited (PSPCL) and the Municipal Council (MC). This is not the first time that such an incident happened. To prevent such incidents, the Administration should take action against road contractors and the PSPCL staff, who are not taking their duties seriously. Also, the Administration must ensure repair all hanging electric wires and potholed roads.

Authorities have to wake up from slumber

It is not for the first time that a man was electrocuted on a potholed road in Zirakpur. Scores of such incidents happen daily because of open manholes, naked, obsolete and broken electricity wires, choked drains, unsafe buildings and bridges and open electricity junction boxes. The authorities swing into action only after an unfortunate incident is reported. Such incidents happen because there is no check on infrastructure. The administration should wake up from slumber and make all out efforts to avoid such tragedies, which can be attributed to employees’ negligence.

Housing colonies are mushrooming in Zirakpur. Builders have built multi-storey flats without considering the quality of infrastructure available in the town to make fast buck. Zirakpur Municipality with paucity could not provide proper roads, sewage and rainwater drainage system. Roads and streets were laid without considering the natural flow of rainwater. Now to rectify faults in infrastructure, a panel comprising experts in town planning and engineering should be formed. All roads and drainage system should be planned and reconstructed.