Open House: what steps can be taken to improve public bike-sharing system? : The Tribune India

Open House: what steps can be taken to improve public bike-sharing system? 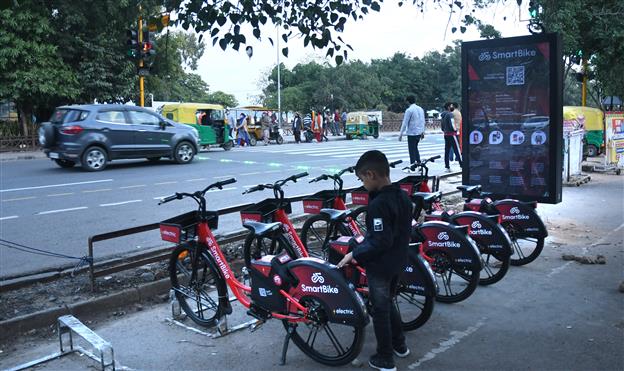 Third phase of the public bike-sharing project is set to be launched in City Beautiful soon. File photo

The issues of Internet connectivity be removed at the earliest. It will require more funds for setting up advanced systems and trained staff to manage the same. The system will help users to know if there is sufficient space available to dock bicycles. As such it will save the users from overshooting the time.

The need of the hour is to create more awareness on the bike-sharing project. Bicycles not only keep you physically and mentally fit but also reduce pollution level in the city. Install CCTV cameras at docking stations to keep vandals in check. The administration should provide Internet at docking stations free of cost.

The project has been introduced in the city for the convenience of commuters. There may be teething problems but it is going to be successful in future. CCTV cameras should be installed to ensure the safety of the bicycles. The problem of Internet connectivity has to be sorted out to make the project a success. The authorities should come up with safety norms to overcome the existing problems.

The authorities should launch an app that will send an alert to the Police Control Room and the staff concerned in case of vandalism of bikes. Culprits should be strictly dealt with.

The authorities should improve Internet connectivity so that people don’t face problems in using the facility. Guards should be deployed at docking stations. They will help users as well as ensure safety of bikes.

With the fuel prices going through the roof, more and more people are attracted to bike stands, only to be greeted with defective cycles and an app that works in fits and starts. Though the Smart Bike app promises an annual subscription, it doesn’t allow you to subscribe. QR codes of some bikes have been torn. In one case, even after scanning the code, the bike did not unlock and the money got deducted. This was true of the yellow bikes at the station near the Sector 42 lake. The red bikes, which are battery-operated, are often out of charge. There is no effective grievance redressal system. The number given on the app is seldom picked up. The executive is unable to resolve the problem of the app deducting money without unlocking a bike.

It is expected that every new project will encounter some glitches initially. In order to remove various glitches that arise in the first and second phase, the company looking after the project has decided to link procedures with Bluetooth. The system must be user-friendly and has zero fault. There should be a standard operating procedure and it should be displayed at every docking station. There should be an online grievance redress system. CCTV cameras should be installed at each docking station and the police must keep a strict vigil to prevent damage caused to bikes by vandals. Violators must be punished.

Before the launch of the third phase of the public bike-sharing project, the authorities concerned should ask the telecom companies to complete the laying of underground cables as early as possible. The service should be made Aadhaar-based. There must be an attendant at every station and it should be made mandatory for each person to dock the bike at the station from where it was picked, so that the attendant concerned should be held responsible for damage caused to bikes. The bikes should be fitted with GPS to make tracking easy.

To improve the system, the administration should ensure that there is a good Internet signal across the city. Guards should be deployed at each docking station who can also help users in using the facility.

We hear about glitches in the app, which is the backbone of the project. A thorough dry run should have been conducted before launching the project. The recent incidents of vandalism are really a cause for concern. The culprits should be tracked and punished. The administration has to secure these bicycles by installing an automatic alarm system.

The project is set to enter its third phase, but problems are still not sorted out. Poor Internet connectivity, mobile app glitches, damaged cycles, unavailability of cycles at docking stations, low batteries, non-working QR codes, etc, are the problems that need to be addressed to make this project a success. Deploy staff at the docking stations to prevent cases of vandalism. The staff can help users in case of poor Internet signal or other problems. CCTV cameras can be installed to keep an eye on vandals. Launch a dedicated helpline where people can report dumping of cycles away from stations. Internet connectivity needs to be improved for the success of this project. Real-time monitoring of cycles can be done.

Proper Internet connectivity should be provided across the city. All tracks should be maintained to ensure a smooth ride. Police should keep a strict vigil at docking stations to keep vandals in check. The users should bear their identity cards while using bikes.

App should be made more user-friendly

Using a bicycle remains a challenge for users as they continue to encounter various glitches due to poor Internet connectivity and low battery. Cases of vandalism are a cause for concern. Unscrupulous persons dump bikes at random places or even damage these. The authorities may consider the credit card system for using bikes.

Keep an eye on vandals

The authorities should install more routers across the city to improve Internet connectivity. Install CCTV cameras at docking stations to keep an eye on vandals. Users should have proper identity cards and their verification should be ensured.

The app should be equipped with features to prevent it from crashing. A worker should be stationed at every docking station, who can use his account to help users in case the app does not work. The worker should also act as a security guard to protect the bikes from vandals or thieves. The authorities should install automatic alarms on bicycles to prevent theft or vandalism.

In my opinion, regular maintenance should be carried out by the authorities to keep the cycles in good shape. The bandwidth of the Internet should be elevated to match the connectivity of mobile phones so that one can easily unlock a bike with the app. Violators and vandals should be identified and fined a hefty amount.

Although there are a few shortcomings, the public bike-sharing project is a good initiative. CCTV cameras should be installed to nail vandals and thieves. Regular supervision should be done and damaged bikes removed from docking stations. Members of sector welfare societies can keep a watch on stations.

Anup Gupta has been elected new Mayor of Chandigarh. What are your expectations from him during his one-year tenure? Share your views.