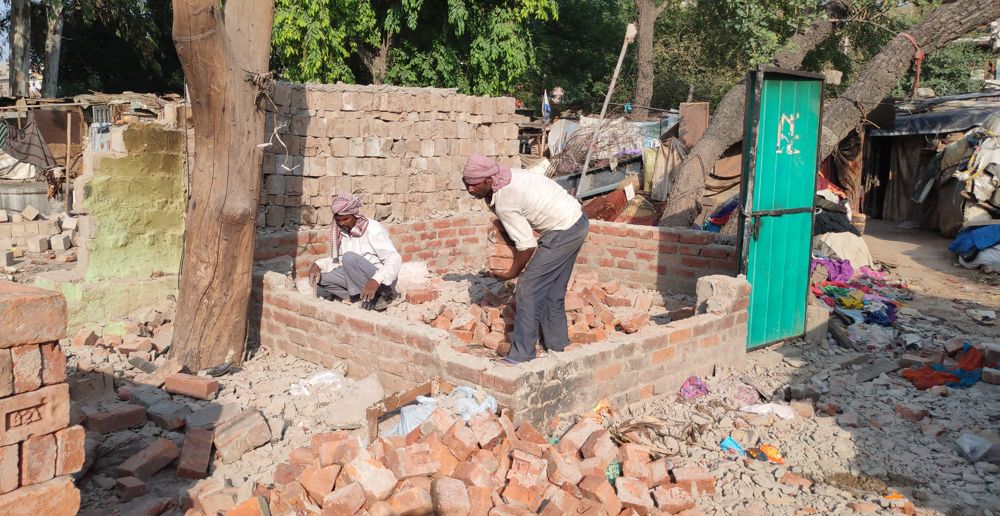 Residents demolish their illegal structures at a colony at Sector 25 in Chandigarh. file

Serious lapse on part of authorities

Allowing government land to be encroached upon is a serious lapse. Such encroachments should be removed at the initial stage itself rather than allowing these to expand. Regular surveillance of the city area by the authorities is required to stop encroachment.

Encroachments are infringing rights of other citizens. The government land is encroached due to lack of periodical monitoring and timely action. Greed, selfishness, and jealousy can be cited as reasons behind alarming rise in encroachments. People should realise that government land are for creating common infrastructure for the benefit of the public.

Step up vigilance to identify violators

No public land can be encroached without connivance of corrupt elements in the UT Administration. It is always expected that the officials concerned get their act together the moment any encroachment on government land comes to their notice. The Administration should step up vigilance to identify violators and take exemplary action against them. Such deterrent action may dissuade others from illegal occupation of the government land.

The UT Administration should form teams headed by the SDM to conduct survey in their respective areas once in a month and ensure that there is no encroachment on government land. The team should submit a written report to this effect to the authorities concerned. Due to non-accountability and laxity, officials rarely check encroachments on time. Later, it becomes a big issue to get the land vacated as politicians also jump into the fray to save their vote bank.

One fine morning the UT Administration suddenly realises that slum dwellers have encroached upon vast tracts of the government land and erected their shanties thereon. Notices are served to vacate the land. Then shanties are bulldozed on expiry of the notice period. It is needless to say that slum dwellers, mostly migrants, did not settle here overnight. They have voter cards, Aadhaar cards and power connections with their residential addresses. Suddenly uprooting them has not gone down well with human rights activists and the High Court. If this is to make Chandigarh a slum-free city, it could be cruel and thoughtless step taken by the Administration without providing an alternate shelter to the homeless.

There is no doubt that the ill practice of encroachment goes on with impunity, which proves that even officials in the UT Administration are hand in glove with encroachers. The first and the foremost duty of the Administration is to keep an eye on any type of encroachment in the city. If any encroachment is noticed, then immediately a legal notice should be served on the violator. If still the encroacher is adamant, then court case should be filed against him/her for eviction from the government land. The only way to keep a check on encroachments is strict and immediate action against violators.

Why do slum dwellers encroach government land? Slums are created and nurtured by politicians for maintaining bulk vote bank. Besides, careless attitude of officials concerned to stop people from encroaching government land has aggravated the problem. The best would be to guard all vacant land by erecting a wall or barbed wire fence around it. Officials should be held responsible for encroachments in the city. Besides, saplings can be planted on vacant land. This will rejuvenate environment.

Officials must be held responsible

People encroach land of the government, religious places and panchayats. The UT Administration should demarcate government land and display notice warning public not to encroach such properties, which could invite legal action and prosecution of violators.

There is an immediate need to create affordable housing projects on the city outskirts. Slum dwellers when allocated an affordable house usually give it on rent or sell it. The Administration should ensure that when slum evacuees are allocated houses they live in it. Also the Administration should allot houses to slum dwellers before ousting them from illegal colonies. They also need shelter and are a part of the City Beautiful.

For a long time the authorities concerned have ignored encroachments and provided facilities like mobile toilets and water tankers to dwellers in illegal colonies since they are their vote banks. Now, the authorities are bulldozing temporary hutments though after prior intimation. Who is going to act against lawmakers as they themselves have encouraged illegal occupation of the government land? The law should be equal for all. Targeting helpless poor class is not justified. The authorities need to be fair in their approach towards slum dwellers.

Encroachment on government land is due to non-performance of UT’s officials concerned. It is not easy to reclaim encroached land because of years old built up structures on it. Besides, residents in illegal colonies get water and power supply connections. The authorities should erect barbed wire fence around government land. Officials concerned should be held accountable encroachments in the UT.

Encroachments on government land not only spoils the look and planning of the City Beautiful, but also waste resources. To stop this menace the police and the department concerned should be vigilant. Encroachers must be removed from government land even if force is required. Officials should not be swayed by bribes, threats or fake sympathy while removing encroachments.

The UT Administration should launch a scheme for rehabilitating slum dwellers occupying government land. Under the scheme, the Administration must develop colonies, which have basic amenities like electricity, water and toilets. Slum dwellers must get ownership rights of dwelling in such colonies.

UT should learn a lesson from Punjab

The UT Administration should learn a lesson from Punjab where many politicians and bureaucrats have encroached government land. All open spaces near public buildings should be encroachment free. The Administration should start a drive to reclaim government land. Strict action against must be taken against officials for not keeping a check on encroachments in City Beautiful.

The elite want to live in a slum-free and world-class city. So, all those, who called Colony No. 4 their home, suddenly found themselves displaced. With bulldozers surrounding the colony, many dwellers ran from pillar to post with documents, from the DC office to the Chandigarh Housing Board, trying to prove their eligibility for alternative allotment, but to no avail. Their voter IDs, Aadhaar cards, gas connections and electricity bills all listed their address as Colony Number 4. Only a few months ago, there was a full pace election campaigning in the colony, which was declared illegal. Address of dwellers, which was accepted while casting votes, all of a sudden was considered illegal. In Chandigarh, we sit on the ruins of our predecessors. Why is it that city plans never accommodates thousands of labourers? Do filthy slums with unregulated construction and insufficient basic services show failure of the Administration in urban planning and governance? These slum dwellers are gardeners, masons and mechanics that we rely upon, but can they rely on us?

The growth of population, increasing numbers of migrants and nexus between political leaders and officials coupled with various other factors has aggravated the problem of government land. A common perception among people is that without political patronage encroachment on government land is not possible. Jhuggis did not come up on the government land in a day or month. Surprisingly, residents of a colony, which was here in the UT since last 40 years, got eviction notices. If the colony was illegal, why it was not removed earlier. In order to make the city slum-free, the Administration should form a policy.

To some extent officials are also responsible for encroachment as they don’t visit vacant land regularly. First thing people do to encroach land is defecate in the open. When people notice that the government is not turning a blind eye, they start building makeshift homes and tell their fellow beings also to encroach the government land. To avoid this the Administration should ask town planning officials to visit vacant plots, make sure these are fenced and watchmen are deployed.

Slums are everywhere in the world. The authorities can provide temporary shelter to migrants on their arrival in the UT. Brick kiln labourers are provided accommodation by owners. So, they don’t encroach government land. Strict vigil is required to ward off violators from occupation of the government land.

Encroachments reflect authorities’ weakness and political interference in official work. For poor and needy the government should construct affordable houses. People, who reside in shanties, should be checked and registered periodically to maintain reliable data. At present, most slum dwellers have many shanties in different parts of the city.

Poor should not be targeted

In the first instance, the government land is encroached in connivance with the authorities concerned. This needs to be checked. Secondly, always poor should not be targeted. There are large number of encroachments in posh sectors of the UT, which are ignored by the Administration. Encroachment is an illegal act. So, background/status of encroacher must not be taken into consideration while taking legal action against him/her.

Officials should have acted immediately

Encroachment on government land is illegal. But it is equally worse to bulldoze hutments where people have been living for the last 40 years. It is totally inhumane. Officials should have acted when the first shanty was erected on the government land in the UT. The Administration should depute some inspectors to check encroachments in the city.

While residents’ welfare associations have been maintaining neighbourhood parks in Chandigarh, the Municipal Corporation has decided to rope in private players as well for the job. What other steps should the civic body take for better maintenance of the parks in the UT?