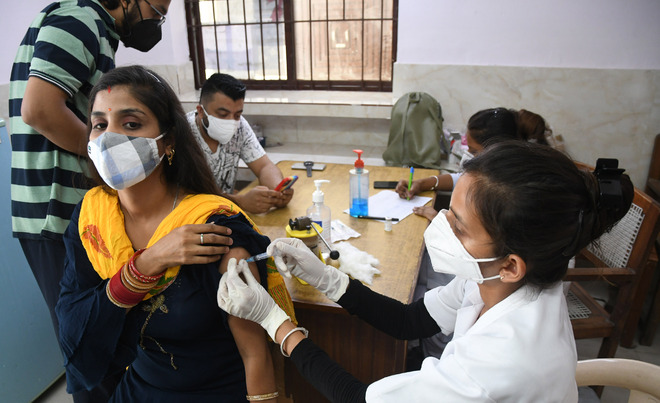 A woman being inoculated during the mega vaccine drive at Government Dispensary in Sector 12-A, Panchkula, on Monday. PHOTO: RAVI KUMAR

As many as 18,724 people were inoculated at a mega vaccination drive conducted at 65 centres across the district today. While 15,725 people were administered Covishield, 2,999 people were given Covaxin.

A special vaccination camp for industrial workers was organised at Amartex in the Industrial Area, Phase 1, by the Panchkula Chamber of Commerce and Industries with the assistance of the Health Department.

At least 790 people were vaccinated at the special camp, against a target of 600. This came after a week-long vaccination drive for shopkeepers and their workers.

Haryana Speaker Gian Chand Gupta, who inaugurated the camp, urged the industry representatives to organise more such camps to cover all industrial workers.

However, only 55,502 people have been fully vaccinated since the vaccination programme began on January 16.