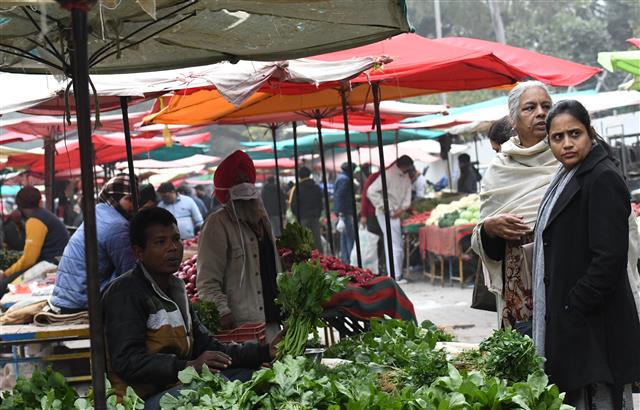 People without a mask at Apni Mandi, Sector 15, in Chandigarh on Wednesday. Tribune photo: Manoj Mahajan

Despite the city reeling under the highly infectious third wave, around 97,967 beneficiaries are yet to take the second dose in Chandigarh. Amid the growing infection rate and deaths among unvaccinated patients, the UT Health Department is on its toes to spur up the vaccination numbers.

Worried over the rise in cases, Yashpal Garg, UT Health Secretary, took stock of the Covid vaccination in the city. Garg said, “The Covid infection is spreading in the city at an alarming speed and we have already crossed the highest daily cases, daily positivity rate, weekly positivity rate and active cases on a particular day recorded during the first and second wave. There are more than 9,500 active cases in the city.”

“After a minor dip, the increasing trend of daily positive cases is back and hence we need to be very careful. Yesterday, there were two Covid deaths in the UT and unfortunately, both of them were unvaccinated. The Health Department has deployed a lot of its resources for early vaccination of the eligible persons. We have sufficient doses of the vaccine and there is no waiting time for getting the vaccination. Citizens must take both doses of the vaccine.”

Several beneficiaries are already past the due date of availing the second dose. The second dose coverage of the city stands at 99.11 per cent, while for the first dose, the coverage is 126 per cent. This implies that around 2,22,940 people have been inoculated more than the target of 8,43,000 for the 18 and above age group.

The Health Department has now set up a separate call centre wherein these beneficiaries are being separately contacted and briefed about their overdue status. During the past two days, about 20,000 telephone calls have been made to such beneficiaries.

Health Secretary Yashpal Garg directed the Health Department to vaccinate 100 per cent of the children between 15 and 18 years of age at the earliest. The Health Secretary said, “We are behind as many states and UTs have covered more than 90 per cent of their target population of children. We set a target of providing the first dose vaccination to 100 per cent of the target population of our children, but now it is not possible due to the slow pace of daily vaccination. Now, we have revised the target to January 26.”

The vaccination of children between the age of 15 and 18 started on January 3 and so far, Chandigarh has vaccinated about 65 per cent of the target population (72,000).