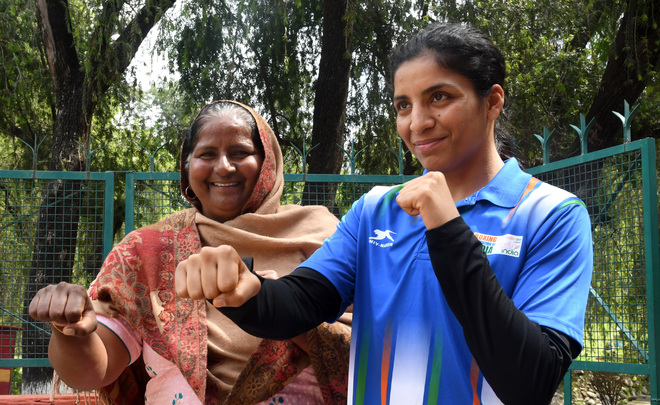 Simranjit Kaur Baatth lost many things in life before winning a ticket to the 2020 Tokyo Olympics. Once reluctant to take the ring, the Punjab boxer stunned second seed Namuun Monkhor of Mongolia in the quarterfinals of the Asia-Oceania Olympic Qualifiers at Amman, Jordon, to secure a chance to compete in the quadrennial showpiece. However, it was not before she overcame the loss of her father.

“It was a tough competition and I needed to work on my speed. As there is no clarity on the Tokyo Olympics, I still have time to improve on my mistakes,” said the 24-year-old.

Simranjit, however, knows that the road ahead won’t be easy. “The competition surely won’t be easy and the group of 16 has made it tougher for us to compete among the best of the world. But I am committed to give my best,” she pointed.

Simranjit rose to prominence after she won the bronze medal at the 2018 World Championships. But the joy did not last long as she soon lost her father. It was the second biggest loss for the youngster after she had witnessed the death of her grandfather, who was killed by terrorists in 1992.

Crestfallen, it was Simranjit’s mother Rajpal Kaur who motivated her to join the national duty and fulfil her father’s wish of watching her represent the country.

“At a young age, she has suffered a lot. But I am happy that she is moving in the right direction. Her biggest opponent was her fear but over the years, she has managed to overcome it,” said a proud Rajpal.

After the loss of her grandfather, the financial condition of the family turned for worse, but Simranjit stood firm amid adversity.

The budding pugilist from Chakar village in Ludhiana though revealed that she never intended to be a boxer. “I still remember the time when my sister Amandeep Kaur took me to the ring. I came back crying and never wanted to go back. One Sunday, my mother forced me to go there with Aman and that day changed my life,” Simranjit recalled.

“I never wanted to become a boxer, but it was only after watching my sister and my brother putting in a lot of effort that I decided to give it a try. It was very difficult at the beginning, but what I learnt during that time is helping me even now. I remember training under Nitin Kumar sir at Balwant Singh Sandhu’s academy... that phase changed my life,” said the only female pugilist from Punjab to have qualified for the Tokyo Games.

Simranjit has also not forgotten her first day at the national camp where she faced the likes of Sarita Devi and Mary Kom. “I also remember my first day at a national camp. I stood like a punching bag, watching my competitors. It was a harrowing experience. But this was the time when I decided to improve as a professional.”

Popularly known as Simar Chakar after the name of her native village, Simranjit started her boxing career with 48kg category and shifted to 64kg class before competing in the 60kg — an Olympics weight category — at the advice of her coaches.

“I started with 48kg at my village and ended up competing in the 64kg class. However, I decided to shift to the 60kg category after taking suggestions from my coaches,” she said.

When asked, how she was managing expenses for her training and diet, Simranjit had just a smile to offer. She is one of the players from the state who are yet to receive their dues from the government.

“I met Punjab Chief Minister Captain Amarinder Singh and Sports Minister Rana Gurmit Singh Sodhi today. They have announced a cash prize Rs 5 lakh and also assured me of a government job. Otherwise, I am getting sponsorship from Lakshya Sports and little help from others as well,” said the boxer.

Simranjit also revealed that she requested the Sports Minister to appoint a professional coach at the academy in her village.

She though did not comment on not receiving the prize money for winning the bronze medal at the 2018 World Boxing Championship and other events.