Painter murdered over petty issue in Mohali : The Tribune India 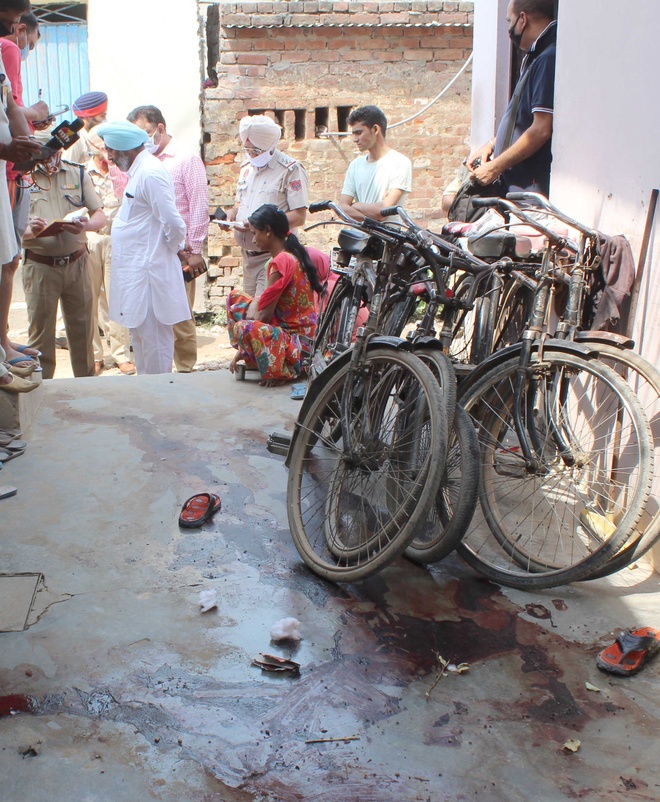 The spot where the victim was murdered outside his house at Badmajra village near Balongi in Mohali. Tribune photo: Vicky

A 35-year-old man was allegedly killed by six unidentified persons over a petty issue at Badmajra village near Balongi here late on Saturday night.

The victim has been identified as Sanjay Yadav (35), a resident of Badmajra village and native of Uttar Pradesh. Sanjay, who had been working as a painter, was living in a rented accommodation along with his family.

As per information, the incident took place around 11.30 pm near the victim’s house when Sanjay saw three persons urinating near his house. As he objected to their act, they started abusing him and a scuffle broke out between them following a heated exchange.

After this, they left the place. A few minutes later, they came back with three more persons. They called Sanjay out of his house. As the victim came out, they repeatedly attacked him on his legs with a knife. They also hit him on his head using a brick.

The assailants then fled on their bikes leaving the victim in a pool of blood.

According to the police, a few villagers had seen the suspects fleeing on three bikes after committing the crime. The police also said the suspects might be in an inebriated state, as a few bottles of alcohol and glasses were found at the spot.

Sanjay was rushed to the Civil Hospital in Phase VI where he succumbed to his injuries.

SP (Investigation) Harmandeep Hans said, “The attackers are yet to be identified. Some rivalry can be the reason behind the murder and we are probing this angle too. No weapon has been recovered from the spot.”

He added that the footage of CCTVs was also being scrutinised. Due to darkness, the suspects were not clearly visible in the footage as the cameras were not night-vision gadgets.

A case under Sections 302, 34 and 450 of the Indian Penal Code has been registered against the unidentified assailants at the Balongi police station on the statement of the victim’s wife, Urmila. The investigation has been initiated into the case. Sanjay is survived by his wife and a six-year-old daughter. The body has been kept in the mortuary of the Civil Hospital. The postmortem examination will be conducted tomorrow.