Ray of hope as only 2.52% hospitalised 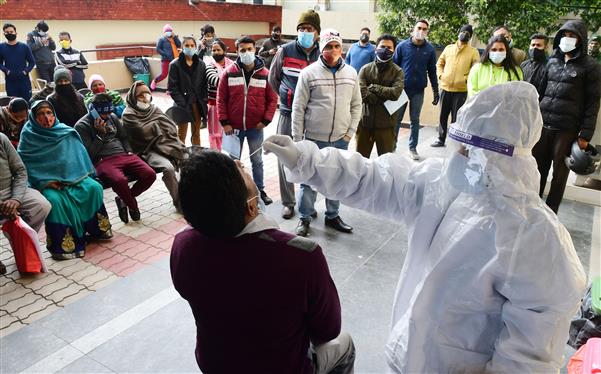 A health worker takes a sample for the Covid-19 test as others wait at the Civil Hospital in Sector 6, Panchkula, on Monday. RAVI KUMAR

The positivity rate in the district — the percentage of Covid tests that are positive — reached a record-breaking 42.10 per cent today. The district logged 344 fresh Covid cases – lower than yesterday due to a significant drop in sample collection.

The number of recovered persons rose to 31,006.

Yesterday, the district had recorded 418 cases at a positivity rate of 19.78 per cent.

How the positivity rate has progressed in the district

‘Not a realistic picture’

“The positivity rate doesn’t present a realistic picture because we didn’t have an accurate denominator with lesser number of tests. The positivity rate went up above 42 per cent because we had less testing on Sunday and only those people who were symptomatic turned up for testing. Generally, we conduct around 2,500 tests each day, but on Sunday, we could only conduct less than 900 tests due to bad weather conditions,” said Dr Mankirat Murara, a spokesperson for the Health Department.

As many as 602 beneficiaries were vaccinated with the precautionary dose in the district as booster doses were rolled out on Monday. Among them, 245 were healthcare workers, three were frontline workers and 354 were above the age of 60 with co-morbid conditions. Overall, the district vaccinated 6,823 people — 3,103 with the first dose, 3,118 with the second dose and 602 with the precautionary dose. The first dose coverage is 108.5 per cent, while the second dose coverage stands at 98.2 per cent.

As Covid cases continue to head north, the local administration has set up six Covid care centres across the district. However, residents’ welfare associations (RWAs) have put up resistance against setting up of isolation centres in residential areas. Meanwhile, the health administration said things were still under control as hospitalisation was significantly lower this time than the previous waves of the pandemic.