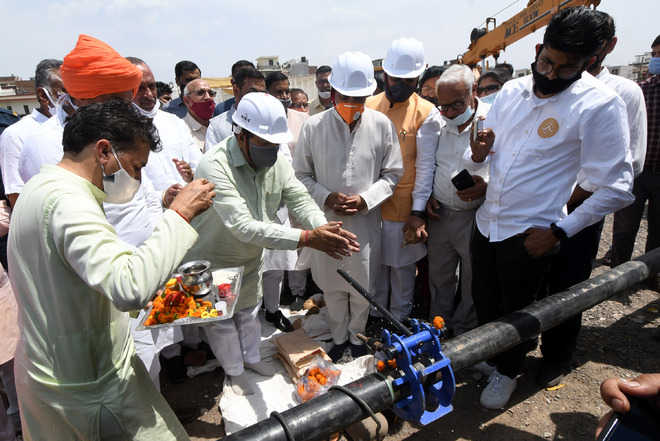 The dream of piped natural gas (PNG) for Panchkula residents is soon going to be realised as Haryana Speaker and local MLA Gian Chand Gupta laid the foundation stone of a natural gas pipeline in the vegetable market ground, Sector 15, here today.

The work of laying the pipeline will be carried out by Indian Oil-Adani Gas Private Limited. Describing it as a historic day, Gupta said the project would usher in a new era of development for local residents.

Under this project, a pipeline of 10.85 km would be laid in the city and the work was expected to be completed in six months. He termed the occasion as fulfilment of his election promise to provide domestic gas to residents through a gas pipeline.

He said in the first phase, CNG filling stations would be set up at petrol pumps in the city in one month. “In the second phase, pipelines will be laid to provide PNG to every household in the city. A target has been set up to complete this work by September 30,” Gupta said.

The Speaker said earlier, there were several apprehensions among people about LPG cylinders such as leakage of gas and cylinder blast, which sometimes lead to fatal accidents. Referring to one such incident, he said seven people had lost their lives due to an explosion of cylinders at a house in Sector 10.

The provision for gas through pipeline would significantly help avert such incidents, he said.