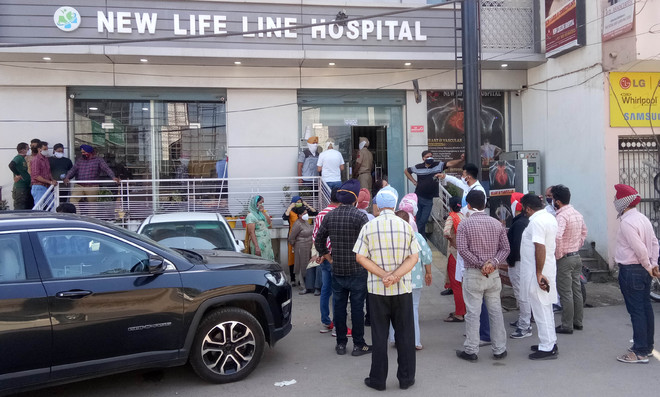 The three-member committee constituted by the district administration here to probe the allegations of overcharging and mismanagement against Zirakpur-based New Life Line Hospital has recommended “strict action” against the hospital.

The committee found lapses in medical record management of the hospital and also submitted that the rates charged by the hospital were “exorbitantly high”. Deputy Commissioner Girish Dayalan had on Saturday marked an inquiry into the allegations of overcharging by New Life Line Hospital and denial to give the body to the family without clearance of bills.

The allegations were levelled by the family members of a deceased Covid-19 patient.

The inquiry report submitted to the DC also stated that the hospital was operating without the National Accredited Board of Hospitals (NABH) certification.

The claims made by the hospital that the patient in question was being treated as per the medical protocols also fell flat as the hospital could not produce any treatment record of the patient. In fact, the entire medical record management system was found to be faulty, the panel mentioned.

The claim of the hospital authorities that they had given left against medical advice (LAMA) to the patient’s family after they wanted to shift him to another hospital could also not be established as the hospital could not produce any documentary evidence in this context, the report mentioned.

It further mentioned that the basic Covid care guidelines pertaining wearing of PPE kits by the sanitation staff was also not adhered to by the hospital.

“Covid-19 norm regarding bio-medical waste disposal and wearing of PPE kit, etc., has not being adhered to,” stated the reports.

The panel was not provided with the stock register, and neither payment received record was properly maintained. No payee PAN detail entries were maintained for any transaction above Rs 1 lakh, stated the panel.

“The rates they are charging for an ICU bed with ventilator are not as per norms issued by the Government of Punjab vide order No. Covid-19/NHM/Pb/21/10280 dated 08-03-2021 and are highly excessive,” it said.

The committee also raised questions on the behavior of Dr Munish Goel. “It is ascertained that medical negligence on part of New Lifeline Hospital, Zirakpur, and the only treating doctor – Dr Munish Goel – cannot be ruled out as no record pertaining to treatment has been put herewith,” mentioned the report.

“The behavior of Dr Munish Goel was not as per his profession. He has been found very rude and violent towards patients and their attendants,” it added.

The panel further mentioned that New Lifeline Hospital “failed to submit the record and mode of payment done by the patient for/during the treatment from the date of admission in hospital till death”.

The committee thus recommended “strict action” against the hospital “under Section 51 (b) & 58 of National Disaster Management Act 2005 and Section 3 of the Epidemic Disease Act 1897.