No curb on dumping of sewage, garbage by Punjab villages 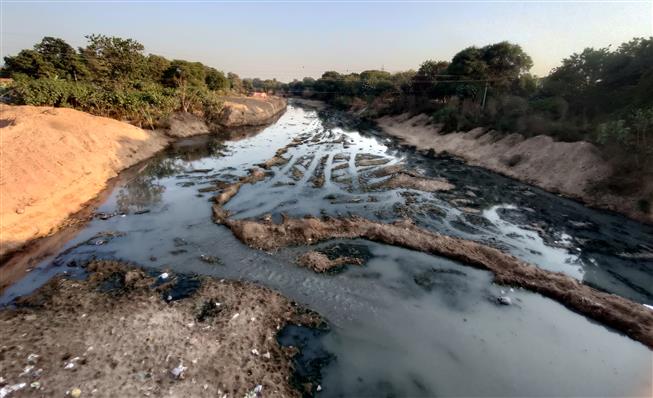 The Patiala ki Rao choe has turned into a perennial wastewater drain, with domestic effluents and sewage discharge ruining the natural source of water on the outskirts of Chandigarh.

Mounds of garbage alongside the seasonal rivulet are a testament to Nayagaon Municipal Council’s monumental failure in stemming the rot. Villages such as Nayagaon, Karoran, Nada and Singha Devi on the periphery are chiefly to blame for the pollution.

All in a decade

Rivulet has turned into a drain in the past 10-15 years. Children know of it only as ‘ganda nullah’. Patiala ki Rao has lost its identity. Ranjit Singh, Khuda Lahora resident

Environmental plan is being reviewed at bimonthly meets. The issue will be resolved once land for STP is made available. Gursharan Das Garg, XEN, PPCB, Mohali

Environmental activists say the absence of a sewage treatment plant (STP) in the Nayagaon area is the main reason for the pollution in the water body. Garbage dumping sites are being run by an outsourced firm from tin sheds as a makeshift arrangement alongside the water body.

It leaves little to the imagination where the sewage discharge and garbage goes — all into the “ganda nullah” (associated with its black water). The rest is strewn on the road, compounding the stray cattle menace.

Nayagaon has emerged as the epicentre of pollution. Residents of villages along the rivulet recount how a clean water body until recent years has been disfigured beyond recognition.

Khuda Lahora resident Ranjit Singh, 62, says the rivulet has turned into a drain in just 10-15 years. “Children know of it as ‘ganda nullah’. They cannot imagine it as rivulet. Patiala ki Rao has lost its identity,” he says.

Nayagaon resident Abhishek Sindhu says: “The Mohali administration and Nayagaon MC have chosen to look the other way. They do not care about rebukes by the National Green Tribunal (NGT) and High Court or fines imposed by the Punjab Pollution Control Board (PPCB). The MC has not been able to take possession of 1,200 kanals at Nada village to set up an STP.”

The PPCB had imposed Rs 2 lakh environmental compensation on the MC for its failure to construct compost pits. The civic body was told to deposit another Rs 1 lakh as bank guarantee. The NGT had further asked for a status report from the Mohali DC regarding pollution in the rivulet.

Ironically, the area falls in the Kharar Assembly constituency represented by Punjab Minister of State for Tourism and Cultural Affairs. It is 3.3 km from Punjab Chief Minister’s residence and takes barely nine minutes to reach there from the seat of power.