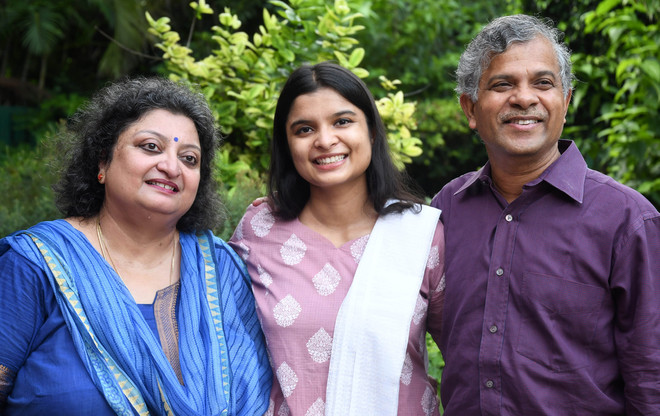 Riddhima Shrivastava (Air74) is all smiles with her parents. Pradeep Tewari

Riddhima Shrivastava (24) has cleared the Civil Services examination conducted by the UPSC by securing the 74th rank. The results were declared today.

Riddhima, a resident of Sector 24, graduated from Punjab Engineering College, Sector 12, in 2017 and cracked the Civil Services exam in her second attempt.

She said, “I rate myself as an average student and if I can crack the UPSC exam, I believe anyone can. Discipline and consistency are important while preparing for the exam.”

Riddhima said she studied for six to 10 hours a day, depending upon the phase of the examination. After every phase, she would give herself a break.

Her mother Raji Shrivastava is an IAS officer posted as the Principal Secretary, Women and Child Development, Punjab, while her father Pramod Shrivastava retired from the IRS.

A Mohali girl, Dr Darpan Ahluwalia (26), got the 80th rank in the examination.

Darpan did her MBBS from Government Medical College, Patiala, two years ago. She said it was her second attempt. She said she had been preparing for the UPSC exam ever since she did her MBBS. She said initially, she used to study for five to six hours till the prelims and gradually increased the time.

Her father Gurinder Singh Walia is a Joint Director in the Animal Husbandry Department, Punjab, and her mother Navneet Walia is a homemaker. She said her mother had done MPhil in economics, which helped her a lot in clearing the exam.

Darpan had taken medical science as a subject in the exam. On changing the profession from medical to bureaucracy, she said she did not change the line and, in fact, got a bigger platform to serve people.

She said her parents inspired her to work hard to achieve her goal.